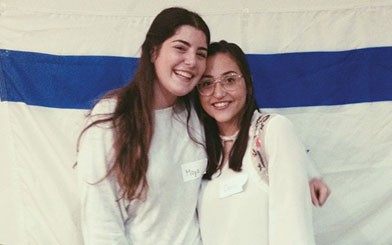 This article was written by Debra Rubin and originally appeared in New Jersey Jewish News, online and in print, October 3, 2018.

Whereas most Israelis enter the Israel Defense Forces after high school, two recent grads are coming to Middlesex and Monmouth counties.

Maya Shany and Dana Zachar, both 18, will defer their mandatory military service until they return to Israel in 2019 and instead spend their gap year educating the local community about the realities of living in Israel and the state’s connection to the Jewish people through holiday programs and speaking engagements. It’s all a part of the Shinshinim (Teen Ambassadors, a program of the Jewish Agency for Israel (JAFI), a program that brings young Israeli emissaries to North America.

“This will be a great year that will be really special because not a lot of 18-year-olds get to spend a year where they can go out and see the difference in cultures and meet people they can influence,” said Shany, who is assigned to Middlesex County and is living with a family in East Brunswick. Zachar covers Monmouth County and is living in Rumson.

Their stay is being covered by an appropriation from the Jewish Federation in the Heart of New Jersey and $6,000 each from four Conservative synagogues, Congregation B’nai Tikvah in North Brunswick, Congregation B’nai Israel in Rumson, Neve Shalom in Metuchen, and Marlboro Jewish Center. They arrived in late August and their year of service will include working at Jewish day camps next summer.

“They’re here for all parts of the community, every age, all denominations,” said Dan Rozett, federation’s director of community and Israel engagement, in a phone interview. “Each of the four synagogues will get them from six to eight hours weekly.”

While declining to disclose the amount of its appropriation, Rozett wrote in an email to NJJN that federation has made “a strategic decision to direct significant funding for Israel engagement and youth and synagogue programming, of which Maya and Dana are a major part.”

Although the teens will be available to conduct programming at any synagogue, school, or venue in the Heart of New Jersey catchment area, according to Rozett, the four co-sponsoring synagogues will be given first priority.

“We thought it was an incredible opportunity to partner with federation and bring the concept of Israel to young people in the synagogue,” said B’nai Tikvah president Adrienne Ross, adding that Shany would conduct extensive programming with Hebrew school students and youth groups.

This is not the first time in North America for either of the Shinshinim representatives. Zachar is from Beersheva, aligned with Montreal through Partnership2Gether, a JAFI program which connects Jewish and Israeli communities through city-to-city partnerships. She worked with teens at Camp B’nai Brith outside of Montreal, an experience that convinced her to do a service year with Shinshinim.

“Something was telling me I wanted to do this year here,” said Zachar in an interview conducted at the federation’s South River offices.

Part of her motivation is to correct misconceptions about Israel in the diaspora communities. “I saw in Canada there were a lot of differences in youth abroad and I wanted to represent Israel,” she said. “I’ve talked to a lot of people here who have a lot of misinformation. I’ve been to six different events and in four of these I was told how everyone has a gun in their homes in Israel. You can’t just buy a gun in Israel.”

Shany is from Reut, a village that is part of Modiin. When she was 10 she lived for a year in the Riverdale section of the Bronx, because of her father’s employment, a time she called “one of the best experiences of my life.” 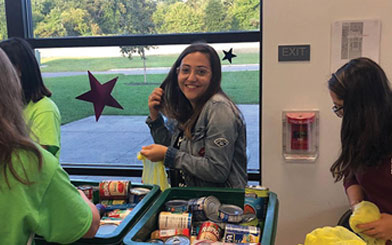 “I think that was a huge reason why I wanted to come here this year,” said Shany, who wants to learn more about the American-Jewish community. Her experience with children includes working for three years as a counselor in one of the camps of the Tzofim, Israel Scouts.

So far the shinshinim have run Sukkot programs at the four Conservative synagogues, and spoke to a sociology class at East Brunswick High School. They found many students were curious about Israel but knew little about it, particularly with regard to its borders; one student guessed it was next to France, another said Iran.

The differences between American and Israeli high schools surprised the Israeli ambassadors.

“In Israel we call teachers by their first names,” said Shany, and Zachar was “shocked” by the size of the cafeteria and all the school sports memorabilia displayed, “just like you see in the movies and TV.”

Other contrasts that have stood out in America include the politeness of grocery store clerks, and seeing people drive to services on Yom Kippur. They are not particularly observant, they said — in fact many of the American Jews they have encountered are far more observant than them — but neither would consider driving on the Day of Atonement.

The four synagogues sponsoring the teens said they viewed Shinshinim as a way to make Israel relatable to congregants, especially the youth.

“The truth is, many of our young people are insecure about speaking their minds about Israel,” said B’nai Tikvah’s Ross. “[Shany] came for the holidays and they talked about issues of human rights and that not all Israelis support their prime minister, just like not all Americans support our president. She brings Israeli issues and culture close to the congregation and provides us with a perspective we never would have had, had we not partnered with federation.”

Rabbi Ron Koas, the education director at Marlboro Jewish Center, said the synagogue wanted to “increase the level of knowledge about Israel among our congregants, especially our school-age kids.”

Koas, a native of Israel, said Zachar had already made an impression over the High Holy Days by noting the differences in how American and Israeli communities celebrate Rosh HaShanah and Yom Kippur.

Zachar will be working heavily with religious school students, including a Jewish film class for high school students, said Kovit-Meyer, adding, “She already spoke to us on Rosh HaShanah and everyone loved hearing from her and learning more about Israel.”

“We at this synagogue are committed to having a strong Israel program,” Wise said. “She is an Israeli counterpart for our young people who will bring the culture and educate them about life in Israel.”