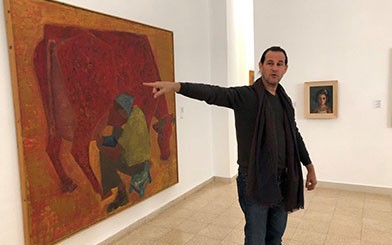 Words make order from chaos. Because words have generally-accepted meanings, individuals can function in a group, system, or society – say, one that builds or fixes things, provides sustenance or enjoyment.

When people define their terms differently, though, things can get messy. I realized this on the dating scene, when someone else’s idea of being “easy-going,” for example, was not the same as mine. As a parent, I’ve learned my definition of “clean” is not always the same as my kids’.

I recently returned from vacation in Israel, specifically an arts & culture immersion trip in the north. Spending a week steeped in all things visual – painting, photography, sculpture, textiles, video, architecture, even dance – I have never been deeper in thought about the meanings of words. Words like “Israel.”

Signing up, I figured I’d be learning a lot about art and The Mishkan Museum of Art, the organizer of my trip (which, by the way, wow!). I didn’t know that I’d learn how many different meanings Israel has to different people – to different Israelis. 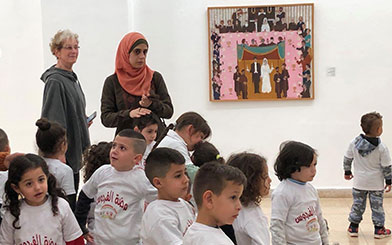 The Mishkan Museum of Art is Israel's first art museum. Today it is also a center of education for Jewish and Arab children from the neighboring Jezreel Valley.

In one week, our small group met more than a dozen artists, curators, and collectors. We explored hundreds of works ranging from paintings that were carried on the backs of pioneers fleeing pogroms, to the most contemporary conceptual installations. Each artist appeared to put his or her own Israel, and Israeliness, into their work – and each was vastly different in their expressions of Israel’s people, politics, history, its aspirations, triumphs, wounds, and regrets. With every artist, every teacher, every patron and work I encountered, I learned more ways to describe Israel: words such as searching, mirror, ember, mother, to name a few. The meanings behind the words, to me, are nuanced and complicated and challenging and endearing, and each has some special thread of magic running through it.

The week after my trip, I had my xx-year (I’ll never tell) college reunion. An old friend, Jewish friend, bristled on hearing I’d just come back from Israel. “I couldn’t go there,” she said, disapprovingly. Apparently, in her mind, Israel means just one thing. It was clear we define our terms differently.

Long before this vacation, I personally viewed Israel as many different things – some that awe me, some that encourage me, some that trouble me. I have never felt I need to like or agree with everything that happens there to see the goodness in Israel – surely in its people and its place in the world, but more than that… Israel with a capital I and everything that means. 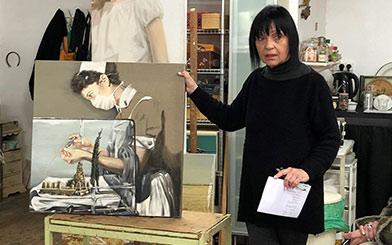 As for the artists and curators we met, whose burning questions (and even some answers) about family, identity, and peoplehood – among many others – are all in their work, I am deeply grateful. Thank you for sharing your Israel with me, and the world.

The Mishkan Museum of Art is Israel’s first art museum, founded in 1938 in a wooden shack ten years before Israel became a state, as the result of a dream of the founders of Kibbutz Ein Harod , itself started in 1921. Despite irregular electricity supplies, not enough food to go around, and routinely needing to fend off hostile raids, the pioneers of Ein Harod decided that art must have a place in their lives. One resident tells of her mother coming from Eastern Europe in the 1930s with only a record player to her name. Culture mattered to them.

Over the years, the museum’s art collection grew in size and importance – how it grew is a story in itself, one worth visiting The Mishkan to discover! In 1948, when Ein Harod’s population had outgrown its facilities, the kibbutz held a vote whether to expand its dining room or build a museum. The museum won. Today, its world-class collection is housed in one of the world’s first museums to be based entirely on natural light – the groundbreaking building designed by Samuel Bickels.  Bickels’ work at the Mishkan has inspired leading contemporary architects such as Renzo Piano (Houston’s Menil Collection and Basel’s Beyeler Foundation) and the late Louis Kahn (Yale University Library).

This year, The Mishkan Museum of Art celebrates its 80th anniversary with a series of extraordinary exhibits culminating in a landmark exhibit of Chaim Soutine, a major contributor to The Paris School’s expressionist movement of the 1930s and 1940s, and a pivotal figure in the story of the Mishkan Museum of Art. The museum invites visitors from around the world to the Soutine exhibit starting late September 2019, and to a special, privately-curated immersion trip with the Soutine exhibit at its center from November 17-22, 2019.