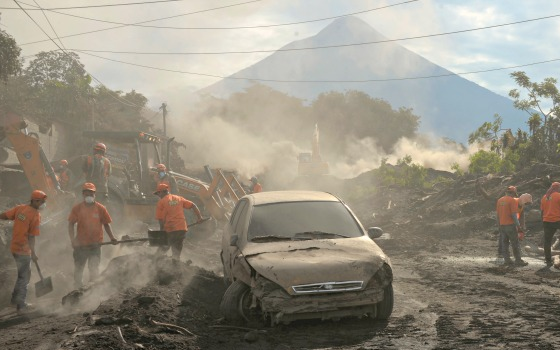 A Talmudic phrase that we as Jews, as humans, should live by. Jewish organizations world-wide and The State of Israel, have shown the world repeatedly that indeed the above phrase is the driving force behind the deployment of scores of rescue and humanitarian missions around the world.

Judaism has two components, religious and national. Jews not only practice Judaism as a religion, but also belong to the Jewish Nation. Jews are scattered world-wide, but as family we must help one another in times of despair.

The American Jewish Joint Distribution Committee (JDC) and Israeli relief and medical teams have been dispatched to Guatemala in response to the devastating and ongoing eruption of Guatemala’s Fuego volcano, supporting aid efforts to benefit the Guatemalan people, Jewish and non-Jewish alike.

The Jewish Federation allocates 50% of overseas core funding (non-targeted allocations) to the JDC and therefore supporting the Federation also supports rescuing Jews around the world such as in Guatemala.

According to a JDC, June 6th, 2018 press release, aid workers on the ground are distributing “critically needed relief items to those in the hardest-hit areas and are planning for the rebuilding of schools and clinics. JDC is in continuous touch with the Jewish community to monitor changing needs on the ground in preparation for recovery and rebuilding projects, including deploying its experts to develop recovery programs”

Further, Israeli medical teams headed by a representative of the Health Ministry’s emergency department, are composed of experts in treating burns, respiratory diseases and injuries, landed in Guatemala on the morning of June 8th. The delegation will join the local hospitals and help treat the injured.

Community and family extend well beyond our local borders, as it should. The Jewish Federation in the Heart of New Jersey together with our partners around the world, and alongside the Government of Israel, rise-up to aid the members of our extended Jewish family whenever and wherever they are in need.  That is why a portion of our philanthropic support goes to helping Jews in need both locally and around the world. Please click HERE to help us continue supporting these lifesaving efforts.

The JDC is active today in 70 countries, and work to alleviate hunger and hardship, rescue Jews in danger, create lasting connections to Jewish life, and help Israel overcome the social challenges of its most vulnerable citizens, both Jewish and non-Jewish.

Israel's humanitarian efforts formally began in 1958 and in only 54 years, Israel has provided humanitarian aid to over 140 countries. Further, many Israeli NGO’s such as AKA, IsraAid, F.I.R.S.T and Latet have made headlines around the world providing aid in disaster areas. In 2016 the UN ranked the Israel Defense Forces field hospitals as best in the world.