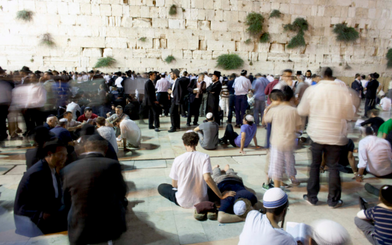 The following was originally published on August 2, 2022, by Unpacked for Educators, a division of OpenDor Media.

“My eyes are spent with tears, my heart burns, my being melts away over the ruin of my poor people.”

These words from Megilat Eicha (or the Book of Lamentations in English) are read every year on Tisha B’Av (the 9th day of the Hebrew month of Av).

Many also recite the traditional Nahem (“comfort us”) prayer, which describes Jerusalem as “the city that is in ruins, despised and desolate, mourning without her children.”

Hold on a second. The ruins of Jerusalem? Our poor, desolate people?

We live in a rare time when there is a modern state of Israel and when the Jewish people have sovereignty over their holiest city. Almost half of the world’s Jews live in their ancient homeland and the Jewish community is thriving there.

Of course, the Jewish people face rising antisemitism and real challenges in 2022, in Israel and around the world. But that certainly does not amount to a poor, powerless people in ruin.

So why is it that many Jews continue to say these prayers and continue to fast and mourn on the 9th of Av? What is the meaning behind these mourning practices for us today?

To answer that question, you’ll need to understand how the 9th of Av became a day of mourning in the first place.

The 9th of Av: A day of Jewish disasters

The short version is that the 9th of Av was a “terrible, horrible, no good, very bad day” for the Jews.

According to Mishna Taanit 4:6, this began all the way back in Biblical times. On the 9th of Av, the generation of Israelites leaving Egypt learned that they would all die in the wilderness and would not be able to enter the promised land.

It was also the day that Nebuchadnezzar, the king of Babylonia, destroyed the First Temple (that King Solomon built) in 586 B.C.E.

And a few hundred years later, it was when the Romans destroyed the Second Temple, which had been built by the returning exiles and rebuilt by King Herod.

In post-Temple times, the day continued to prove inauspicious. In 135 C.E., it was the day that Betar, the last fortress of Shimon Bar Kochba and his Jewish army, fell to the Romans.

One year later, Hadrian, the Roman emperor and ruler of Jerusalem, plowed the area where the Temple had stood and established his own pagan temple there.

There’s a Talmudic idea of “huchpilu bo hatzarot” which means that “all tragedies that befall the Jewish people should be included within the tragedy of the destruction of the two Temples.”

Therefore, the rabbis designated the 9th of Av as the day that Jews would remember not only the destruction of the Temple, but all of the other distressing events that have befallen the Jewish people as well.

The Mishna (Taanit 4:6) says that to commemorate the great sadness, once the month of Av begins (which was this past Friday), one should decrease their level of joy.

In addition to fasting, traditionally observant Jews engage in heshbon hanefesh (literally, “an accounting of the soul”) with a special focus on lessons that we as a community can learn from our past.

The story of Kamtza and Bar Kamtza

One of the most well-known lessons that the Jewish people typically reflect on during Tisha B’Av is found in the Talmudic story of two men: Kamtza and Bar Kamtza, which you can read in Gittin 55b.

This famous story is forever associated with Tisha B’Av because of its opening line: “Jerusalem was destroyed on account of Kamtza and Bar Kamtza.”

If you’re not familiar with this story, you might be wondering how a dispute between two people could have led to the destruction of Jerusalem. But that is exactly what happened:

An invitation to a party is mistakenly delivered to Bar Kamtza instead of, you guessed it, Kamtza. So Bar Kamtza (who happens to be a straight-up “enemy” of the host of the party) shows up to the celebration.

When the host sees his enemy, the uninvited Bar Kamtza at his party, he gets up in front of all of the guests, which included a lot of the leading sages of the time, and basically says to him, “You’re my enemy. What the heck are you doing here? Get out of my party, now.”

The host continues to humiliate Bar Kamtza in front of everyone as Bar Kamtza tries to save face. He offers to pay for his meal if he can stay, pay for half the party, and even pay for the entire party if he can just stay and not be further humiliated, but the host rejects each of his proposals.

Then, the host of the party grabs Bar Kamtza and throws him out of the party. Bar Kamtza is so humiliated and offended that he goes to the Roman king and accuses the Jews of rebelling against the Roman authorities. Eventually, this leads to the destruction of the Temple and Jerusalem.

The 16th-century rabbi Judah Loew ben Bezalel (known as the Maharal of Prague), argued that this story is a warning about the dangers of sinat hinam (baseless hatred).

The Maharal wrote that the problematic dynamics between Kamtza, Bar Kamtza and the host reflected division and hostility that were present in the entire Jewish community at the time.

The Talmud (Yoma 9b) states this idea pointedly: “Why was the Second Temple destroyed? Due to baseless hatred.”

In addition to cautioning the Jewish people against sinat hinam, against hatred and division in the community, the story of Kamtza and Bar Kamtza also has a powerful message about the responsibilities of rabbis and Jewish leaders.

Dr. Noam Weissman put it this way: “The most painful aspect of the Kamtza-Bar Kamtza battle was not the antipathy that was displayed for the other. Rather, it was the esteemed rabbis who stood idly by while their brother was being humiliated.”

Tisha B’Av is an opportunity, each year, to reflect on these types of lessons. In the polarized time that is 2022, how could we heed the lesson of Kamtza and Bar Kamtza and guard against sinat hinam in our communities? How could we create a different community that is based on respect and greater compassion for each person as challenging as this can sometimes be?

What is sinat hinam?

To stem the tide of sinat hinam, we need to understand what exactly this phenomenon is. On the surface, the phrase sinat hinam, or “baseless hatred,” sends the message that there are different kinds of hatred: some legitimate and others totally baseless and illegitimate.

So, what would be illegitimate causes of hatred?

The 19th-century Polish Rabbi Naftali Zvi Yehuda Berlin (commonly known as the Netziv) described sinat hinam as “a tendency to view Jews with whom I have fundamental disagreements as enemies.”

And according to Rabbi Binyamin Zimmerman, sinat hinam is hatred that arises from jealousy or arrogance, or when disagreements escalate and become uncivil and include personal attacks.

Lots of people also include racism, antisemitism and other forms of discrimination as clear expressions of sinat hinam.

Jewish tradition actually makes a clear distinction between sinat hinam and permitted forms of hatred, like the need to distance oneself from a harmful influence. Even so, these examples of “permitted hatred” should be super limited.

The medieval Sephardic rabbi Bachya Ben Asher warned that sinat hinam “is a grave sickness and is the cause of all the sins mentioned in the Torah.”

He instead encouraged achdut Yisrael, Jewish unity, adding that “unity is the essential cause of peace.”

Rabbi Abraham Isaac Kook (more commonly known as Rav Kook) wrote, “If we and the world were destroyed due to sinat hinam, then we shall rebuild ourselves and the world with ahavat hinam (baseless love).”

What is Tisha B’Av really about?

The story of Kamtza and Bar Kamtza and the problem of sinat hinam raises the question of what we are truly mourning on this somber day.

Why should we continue to commemorate Tisha B’Av in an age of a modern Jewish state with Jerusalem as the capital? What is the meaning behind fasting and commemorating this day for us today?

We can all count our blessings that Jerusalem is not desolate and abandoned (as traditional Tisha B’Av liturgy describes). Regardless of one’s politics, the Jewish people having access to our holiest sites, and autonomy in the holiest city, is truly extraordinary.

But this does not render Tisha B’Av and its traditional mourning practices obsolete — there is still meaning behind commemorating it today. For many Jews, that meaning is to remember the destruction of the two Temples and other tragedies that have befallen the Jewish people.

Others continue to mourn on Tisha B’Av because Israel is not yet at peace, because Jews around the world still face antisemitism, or because sinat hinam and division persist within the Jewish community.

As we enter the saddest day in the Jewish calendar, will the Kamtza-Bar Kamtza battle finally be resolved? Will we sit idly by, or will we bring people together? It’s our choice.

Until we can find ways to achieve greater unity through ahavat hinam among the Jewish people, many will continue to mourn, search deeply inside ourselves and commemorate Tisha B’Av as the saddest of days.

Above photo: Religious Jews read from Eicha, the Book of Lamentations as they observe Tisha B’Av on August 8, 2011 at the Western Wall in Jerusalem. (Photo by Uriel Sinai/Getty Images)