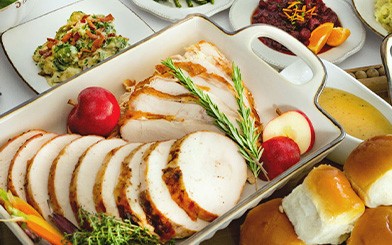 This article was written by Kate Palley and has been reprinted courtesy of MyJewishLearning.

Birkat Hamazon, the blessing after the meal, is also known colloquially as “benching,” the English version of the Yiddish term bentshn, which means to bless.

This blessing (which is actually a series of blessings) is mandated for use following any meal in which bread has been eaten, since according to Jewish law, eating bread officially constitutes a meal. Birkat Hamazon can be said sitting at the same table or in view of the same table where the meal was eaten. At weddings or Shabbat meals, it is often said communally.

Reciting the blessing after the meal is a mitzvah written in the Torah. Deuteronomy 8:10 states, “And you shall eat and be satisfied, and bless Adonai your God for the good land which God has given you.”

Prior to the Blessing

Before saying Birkat Hamazon, many people recite a psalm recalling the destruction of the Temple. On Shabbat and festivals, Psalm 126 is sung, recalling God’s promise to return the people of Israel to its homeland. On other days, Psalm 137, which mourns for the Jewish people during the Babylonian exile, is sometimes recited.

When three or more people (for traditional Jews, three or more men) have eaten together, a short back-and-forth invitation, called a zimmun, precedes the prayer. The leader invites everyone present at the meal to recite the blessing, and they respond with words of praise for God. At a wedding meal, additional lines of praise are added.

When 10 or more have eaten together, God’s name is added to the zimmun. There is also a custom of saying Birkat Hamazon over a cup of wine when 10 people, or more, eat communally.

Structurally, Birkat Hamazon is composed of four blessings. The first blessing, also called birkat hazan, praises God for sustaining life and providing food for all creatures. Often when a group has eaten together this blessing is sung out loud.

The second blessing, birkat ha’aretz, thanks God for being compassionate and nourishing the Jewish people, both with food and with Torah. It recapitulates Jewish history from the Exodus to the conquering of the land of Canaan. The blessing also mentions that just as God sustained the Jewish people in the desert, so too God currently sustains them and will do so in the future. In this second blessing, additional paragraphs are added during Purim and Hanukkah. Today, some Jews add a paragraph for Yom Ha’atzmaut–Israel’s Independence Day–here, as well.

The third blessing, birkat Yerushalayim, begs God to be merciful and continue to support the Jewish people. Whereas the first two blessings praise God, this blessing changes tone, adding a plea to God to quickly rebuild Jerusalem.

The fourth and final blessing, birkat hatov v’hameitiv, stresses the various positive manifestations of the relationship between the Jewish people and God, This blessing ends by voicing the hope that “God will never deny us anything good.”

After the fourth blessing, a series of short liturgical statements, all beginning with the word harahaman, “may the compassionate One,” follows. Each of these asks for a particular gift from God.

One beseeches God to eternally stay the ruler of the Jewish people. Another requests that God grant the speaker an honorable livelihood, send the messiah, and bestow special blessings for others at the table. In communal settings, this litany of blessings will sometimes be read aloud by the leader, after which the others answer “Amen” to each one.

Different communities such as Ashkenazic, Sephardic , Italian, and Yemenite, have variations to the Birkat Hamazon. Words are added to the four main blessings, and some phrases are reordered, added, or omitted. The greatest range of variation appears after the four main blessings, in the harahaman section. Spanish and Portugese Jews may also recite a Ladino song entitled “Bendigamos,” or “We will bless,” after Birkat Hamazon is finished.

History of the Birkat Hamazon

The four main blessings were written down in the Talmud tractate Berakhot. Traditionally the first blessing is attributed to Moses, the second to Joshua, the third to David and Solomon, and the fourth to the rabbis from Yavneh.

Yet the exact wording of the blessings is simply hinted at, not explicitly stated. The Talmud only mentions the blessings by their titles and final lines. These brief, talmudic versions have, in recent times, served as a precedent for shortened texts of Birkat Hamazon.

When bread has not been eaten at a meal, a different blessing, the brakha aharona or the “end blessing,” is said. It has similar text to a shortened version of Birkat Hamazon, touching on all the themes, but with fewer blessings. This can be found in most bentchers, small booklets containing the blessing after the meal and other festive songs. You can purchase a bentcher online or at your local Judaica store. They also are frequently distributed at weddings and bar/bat mitzvah celebrations.

Listen to the Birkat Hamazon