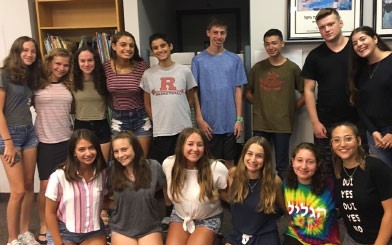 On Sunday, November 18, teens from all over Greater Middlesex and Monmouth counties will gather at Rutgers Hillel in New Brunswick for the Israel Teen Summit.
More than 200 teens in grades 6-12 are expected to participate in this first-time event organized by the Jewish Federation in the Heart of New Jersey, in partnership with area youth groups, such as BBYO, USY, NCSY and others, synagogues, and Jewish schools.
The Israel Teen Summit is an opportunity for teens in 6th-12th grades to virtually experience Israel – with their peers, but without the plane ticket. They will enjoy an Israeli Shuk (marketplace) with food, photo ops, and free gifts from Israel, and a selection of activities and sessions about advocacy, sports, food, innovation, music and more, according to Dan Rozett, the Federation’s Manager of Israel and Community Impact.
The program will start at 1 pm with keynote speaker, Chloe Valdary, Director of Partnerships and Shillman Fellow at Jerusalem U. Previously, Valdary served as a Tikvah fellow at the Wall Street Journal and was named one of Algemeiner’s top 100 people positively affecting Jewish life today. She is a pro-Israel activist and a regular speaker at colleges and high schools across the U.S.
Following the opening session, teens will participate in discussions about Israel advocacy and lobbying led by AIPAC, Stand With Us, the Israeli American Council, and more. The goal is for them to learn how to process and express their own responses about Israel in the context of dealing with anti-Semitism and anti-Israel activities occurring in middle schools, high schools, and on college campuses.
Next, the teens will choose from several experiential workshops about different aspects of Israeli culture: cuisine, music, sports, innovation, the life of the Israeli teen, and more.
The program is planned and organized by a committee consisting of 19 teens, many of whom participated in educational trips with peers to Israel this summer and received grants from the Jewish Federation to help defray the cost of the trips.
"I joined the Israel Teen Summit committee because Israel and all of its aspects are a part of who I am," says Shelly Nezaria, a high school student from East Brunswick. "My love for Israel animates me and I'm so honored that I've been given the opportunity to share my passion for such a special and sacred place with other teens."
For parents who want to be part of this celebration, a special session will be held at 1 pm, also at Rutgers Hillel. The topic of the presentation and discussion will be helping your child deal with anti-Semitism and anti-Israel activities at school.
The Israel Teen Summit, including the parent’s session, is free of charge. It is sponsored by an endowment gift made to the Jewish Federation by the Laurence S. Weiss And Edith G. Weiss Foundation.
For more information and registration, click here or call Inbar: 732-588-1800
Photo caption: Teen volunteers take the lead on The Jewish Federation's Teen Israel Summit Planning  committee. Many committee members are also recipients of Federation teen grants for summer travel to Israel and Federation grants for Jewish summer camp, as well as alumni of Jewish Federation teen philanthropy, leadership development, and community service programs and are also involved in such Jewish youth groups as BBYO, USY, NCSY, and others.