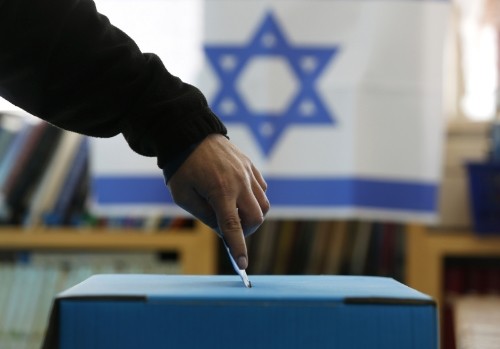 Our Israel office informs us that Israel Radio is reporting that with 99% of the votes counted, the Likud Party headed by Prime Minister Benjamin Netanyahu appears to have won a clear victory over the Zionist Union (Labor- Hatnua) in yesterday’s Israeli elections.

The initial election results (the final tally will be released Thursday morning) places Netanyahu in the best position to form a governing coalition. Netanyahu has stated that he hopes to form a government within the next 2-3 weeks.

This morning, Zionist Union leader Isaac ‘Boujie’ Herzog conceded victory and stated, “that the Zionist Union will continue to serve as “an alternative [to Likud] in every area.”

A few general notes from the election: The election had the highest voter turnout in Israel since 1999. There will be a record number of female MKs and a 29% increase in Arab MKs in the 20th Knesset. The 20th Knesset will have the smallest number of parties since 1992, largely due to the raising of the electoral threshold.

Here is the breakdown of seats, as of Wednesday morning. (Times of Israel) 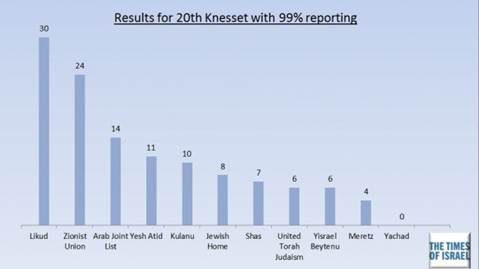 For an initial analysis of the election results, I encourage you to view this brief PowerPoint presentation by Dr Ofer Kenig, of the Israel Democracy Institute.

JFNA will be hosting  a teleconference at 11:15am ET today, March 18, with The Jerusalem Post’s political correspondent, Gil Hoffman.

Hoffman will present an analysis of the election results and share some behind-the-scenes insights and predictions on how the results will impact Israel and the rest of the world. There will also be an opportunity for teleconference participants to ask questions.

From Linda Maizels, Director of Israel and International Concerns, The Jewish Council for Public Concerns

With Israeli elections coming up on  March 17, I wanted to send around a few of the guides I found. I hope they will be helpful to you.  As always, if you have any  other questions, please do not hesitate to be in touch.

And this interesting piece from Wikipedia: http://en.wikipedia.org/wiki/Opinion_polling_for_the_Israeli_legislative_election,_2015

We are also planning a post-elections conference call for the 18th – I’ll send more details when they are available.

Our Israel office has prepared the attached summary of the upcoming elections in Israel, for a Federation audience.

The document briefly summarizes how elections work in Israel, and then goes on to explain where things now stand, and possible outcomes, based on current polling data. We have also included the party lists, as presented, correct to today. As you would imagine, much can change between now and March, but this piece gives you a good idea of general directions.

We will also be holding a series of conference calls, as election day approaches.