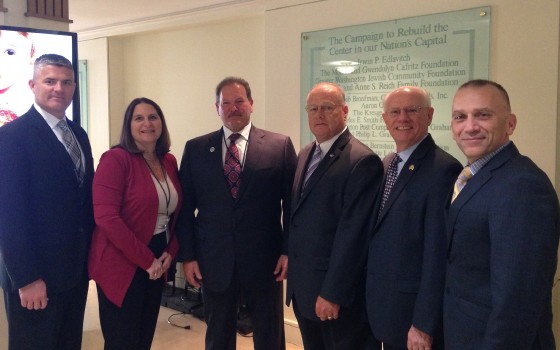 The summit organized by Secure Community Network, an affiliate of the Jewish Federations of North America, drew over 40 security directors from around the country as well as other Jewish officials.

A focus of the summit was the intensified relationship between Jewish communities and the FBI and the Department of Homeland Security in recent months.There were also sessions on campus security and obtaining government grants to improve security.

Top officials from the FBI and from Homeland Security briefed the conference, as did an official from the Belgian federal police. There were presentations on best practices for dealing with a bomb threat and trends in domestic terrorism.

The conference conveyed recognition awards to FBI director James Comey and to the Department of Homeland Security. Accepting them were Andrew McCabe, the FBI’s deputy director, and Elaine Duke, Homeland Security’s deputy secretary.

The Jewish Federations of New Jersey also presented an award to NJ State Police Superintendent, Colonel Rick Fuentes, in appreciation for the State Police's partnership in keeping the Jewish community safe and secure. Jacob Toporek, Executive Director of the NJ State Association of Jewish Federations, stated: "The rapid and efficient deployment of State Police to JCCs during a recent rash of bomb threats significantly lessened the anxiety felt by members of the JCCs and Jews throughout the state."

Toporek added, "As the government affairs arm of all New Jersey's Jewish Federations, the NJ State Association of Jewish Federations is engaged in a statewide and collaborative effort in partnership with the community outreach network of our federations to deliver a message of urgency about our community’s security and vulnerability concerns. Increased allocations in the next State Budget for 2018 for community security is a priority as we speak with the Governor’s Office and legislative leaders.”

Read more about the Jewish Federation in the Heart of New Jersey's efforts to help make the Jewish community in Monmouth and Greater Middlesex counties more secure.