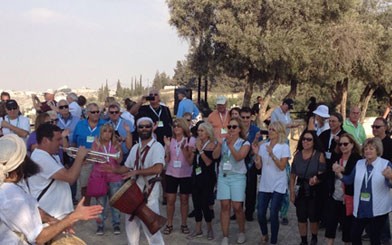 By Jeff Hersch, Marketing & Communications Associate at the Jewish Federation in the Heart of New Jersey. He is currently in Israel traveling with the Four Corners of Israel community trip.

After spending the first two days in Northern Israel, we made our way to Jerusalem. As the buses pulled up to the Has Promenade, the view was nothing short of overwhelming. Photos from postcards and history books suddenly came to life. For many participants, this was the first time seeing the Old City with their own eyes, after decades and decades of learning about it and seeing photos. There it was: the iconic gold dome against ancient white stone buildings, all backed by a bright blue sky. Most photographs do not do it justice, as it’s a see-it-to-believe-it landscape. Many people gasped at the site of it all. It was real, it was true, it was holy, and it was home.

As seven busloads of Jews from New Jersey crowded the overlook, a band broke into song, playing festive music, and just like that, the revelries began. Without any cue, people grabbed hands and began dancing, clapping, and singing in a circle – the hora. I can really only describe it as ‘absolute joy.’ After nearly ten minutes of celebrating our arrival to Jerusalem, we sang the Shehecheyanu blessing and recited the hamotzi, led by Marlene Herman, board member of the Jewish Federation in the Heart of New Jersey, and resident bus singer. The sound of 270 Jews reciting the prayers was so powerful, Jerusalem setting the perfect backdrop. The four 4-foot challahs were eaten, the grape juice was sipped, and the emotions began to pour out.

Following a brief introduction about the city, people shared their thoughts and first impressions about Israel.

Michele Schneiderman was the first to get the mic. “We got to Kol Ami*, and I had my moment. We talked to the most amazing young adults, and I realized this is the next generation. If they go away from here and go home, that’s fabulous! They can join their Federations and JCCs and teach their children about Judaism.” 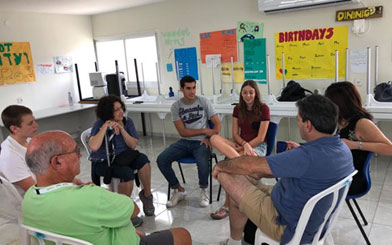 She continued: “It became very clear to me even though Judaism has been very important in my life, how much more important Israel is to me now. I finally see where my Federation money is going and I’m very happy about it. I couldn’t be happier being in Jerusalem. This is my ‘aha’ moment.”

(*Jewish youth come to Kol Ami from all over Israel and the world to better themselves to become the next generation of Jewish leaders, focusing on leadership, community service, love of Israel, army preparation, and understanding of Jewish peoplehood.)

Next to speak was Renee Freedman. “It wasn’t until I came here, I looked at the land and thought ‘Oh my God. Every piece of land is beautifully manicured and used with purpose’” she expressed, holding back tears at one point. “I look down at the city and it looks like a big white heart. It feels like home.”

Everyone listened with elation. The only other sounds were quiet sniffles amongst the crowd as people broke into tears of bliss at the sheer sight of Jerusalem, paired with these touching stories of their friends and neighbors.

The next day, we visited the Western Wall.

After visiting the Wall for the first time, Brian Klioze, one of the trip’s youngest participants, shared his initial thoughts: “As you get closer [to the Wall], you see all the notes and wonder how many Jews have been here. You can see and feel the connection. Everyone is there for the same reason. We don’t have a place like that in the States. You see people praying and crying, and it’s a hard feeling to describe. It has relevance to Jews for thousands of years. I will definitely come back.”

His father, Lawrence Klioze, also a first-time visitor to Israel, shared his feelings: “On the bus coming in to Jerusalem, hearing the story of the Old City, it brought tears to my eyes,” he expressed, trying to hold back more tears. “I remember the Six Day War. Being in Jerusalem now was an emotional experience. I felt something. I felt closer to God than I ever did before.” 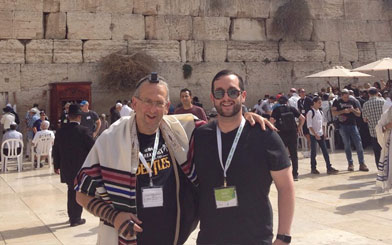 As I spoke to this father and son on their first trip to Israel, I found it fascinating to hear about their different times at the Wall. As I spoke with more people, one thing was becoming very clear: being in Jerusalem promised to bring your emotions out to the surface, no matter what.

Saul Ziss broke into tears recounting his first moments at the Wall, as he explained why he came on the Federation’s trip: “It’s been a lifelong dream of mine to come to Jerusalem. I touched the Wall and felt tears rolling down my face, and I don’t know why. I am not an emotional guy.”

For me, Israel has become a place where I feel safe and free. The sense of belonging amongst a Jewish majority is a comforting, but foreign feeling. Walking down the street and saying “Shabbat Shalom” to passersby isn’t out of the ordinary here, but it’s sometimes perplexing to comprehend these small, delightful encounters, especially as an American from the east coast. Rhondi Solomon shares similar sentiments: “I grew up in a small town with just three Jewish families. Being in Israel, I don’t have to be the different one for the first time.”

One aspect of Israel surprised and astounded Bernie Rosenberg. “The youth, vitality, and invigoration of Israel’s young people is spectacular,” he said. “Israel is a success story.”

If it wasn’t already obvious, I will fill you in: I could write a blog a day for the next year and still have more stories to tell – and we still have more time in Israel! First-timer Aaron Strauss’ words echo in my head, as they reflect everyone’s newfound feelings and attitudes: “To sum it up simply, Israel is here to stay.”