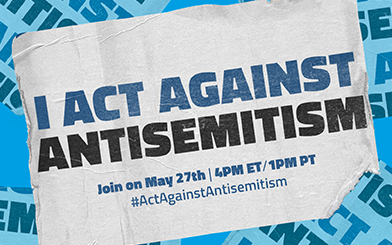 The last couple of weeks’ fighting between Israel and Hamas exacerbated antisemitism across the globe at alarming levels. Jewish communal leaders definitively and immediately united to take -- and demand -- action.

Our parent organization, Jewish Federations of North America (JFNA), was among major Jewish organizations (including AJC - American Jewish Committee, The ADL, Hadassah, and the Orthodox Union) who signed a letter to President Biden expressing appreciation for his strong stance throughout his career against antisemitism and now urging his administration to do more -- and do better. READ LETTER

NOTE FOR TOMORROW at 4PM: JFNA and those same organizations, as well as others, tomorrow, are bringing thousands of people together (7,000 signed up so far) to speak out against antisemitism at a rally featuring prominent government officials and leaders from Jewish and civil rights organizations, among others, including JFNA. You are welcome to SIGN UP.

NOTE FOR TODAY at 3PM: Jewish Federation in the Heart of NJ's Jewish Community Relations Council (JCRC) has urged mayors throughout our area to become better informed about Israeli and Palestinian perspectives by attending a special briefing today from JFNA’s Israel Action Network (IAN) in partnership with A Wider Bridge. You are welcome to SIGN UP.

We are encouraging every concerned person to:

To be clear: It is OK to disagree with positions, policies or actions of the Israeli government. But we must have zero tolerance for demonization, delegitimization, and double standards toward Israel -- in other words, antisemitism.

As we observe Memorial Day this weekend, we honor our fellow Americans who gave their lives for our freedom and democracy, our ability to live in a place where we can agree to disagree about our nation's laws and leaders, and where we can have hope when the day is dark. We wish the same for all people, including the people of every ethnicity in Israel.