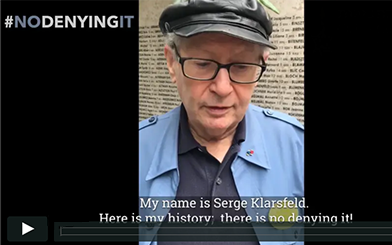 The Conference on Jewish Material Claims Against Germany (The Claims Conference) is conducting an online campaign to ensure Facebook CEO, Mark Zuckerberg, hears their message: Holocaust denial on Facebook must stop.

In the Claims Conference’s first-ever survivor-driven digital campaign, #NoDenyingIt, Holocaust survivors are sharing their personal stories and calling on Facebook to stop the spread of Holocaust denial on its social media platforms.

Jewish Federation invites community members and partners to amplify the voices of the last remaining Holocaust survivors through the #NoDenyingIt campaign.

According to the ADL, large groups of Holocaust deniers gather on the platform. Facebook’s content suggestion algorithm further spreads their content, according to the Institute for Strategic Dialogue, a UK-based counter-extremist organization.

This persists despite Facebook’s August 11, 2020 announcement that it implemented the IHRA (International Holocaust Remembrance Alliance) definition of anti-Semitism – a move it says is intended to tackle hate speech, bigotry, and stereotypes directed toward the Jewish community. (See related story).

Facebook claims it can responsibly monitor content. The company has the technical capability to shut down deniers and does so to comply with several European countries’ laws, which deem Holocaust denial as illegal.

Yet, the company’s policies do not specify Holocaust denial as hate and Facebook has declined to categorize Holocaust denial as a violation of its terms of service, or “Community Standards,” which state that individuals and organizations that promote or engage in violence and hate, regardless of ideology, are to be banned.

Zuckerberg, himself, maintains Holocaust denial reflects opinion, however abhorrent or misguided he says he finds it.

The Claims Conference argues Holocaust denial is intentional and therefore a violation of Facebook’s community standards.

Jonathan Greenblatt, CEO of the Anti-Defamation League, says Holocaust denial is a "willful, deliberate, and longstanding deception tactic by anti-Semites that is incontrovertibly hateful, hurtful, and threatening to Jews."

In June, 2020, the ADL along with more than 1,100 businesses, 100+ non-profits, and countless consumers participated in the “Stop Hate for Profit” campaign pressing Facebook to stop valuing profits over hate, bigotry, racism, anti-Semitism, and disinformation.

Groups as diverse as the governments of Germany, France, and Poland; the Anti-Defamation League (ADL); The Southern Poverty Law Center; and the United Nations -- among many others – agree denying that the Holocaust happened is anti-Semitic hate speech. United Nations Resolution A/RES/61/255 rejects any denial of the Holocaust as a historical event, observing that remembrance of the Holocaust is critical to prevent further acts of genocide.

Although the anti-Semitic nature of Holocaust denial seems obvious, Facebook has yet to do the right thing. The #NoDenyingIt campaign, with the voices of survivors who lived the reality, lived the history – lived the irrefutable facts – seeks to move Facebook in ways grade school-level knowledge of history and a grasp of the difference between right and wrong, to date, have not.

Jewish Federation supports and applauds the efforts of the Claims Conference, the survivors courageously sharing their stories, and the myriad advertisers, civil rights organizations, and decent, thinking individuals participating in the #NoDenyingIt campaign.