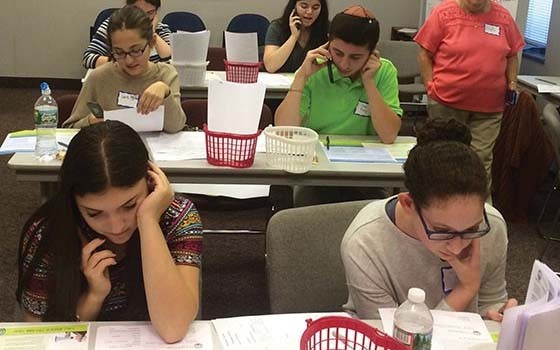 Phones across greater Middlesex and Monmouth counties will be ringing Oct. 29 as volunteers solicit pledges for the annual Super Sunday call-athon benefiting services and agencies of the Jewish Federation in the Heart of New Jersey. The event is the federation’s largest fund-raiser, and its success will depend on a large number of volunteers.

“We are actively recruiting members of the community to come out on Super Sunday to help reach out to donors and supporters to help raise awareness and vital funding for those in our community who are vulnerable, including — but certainly not limited to — the elderly, infirmed, Holocaust survivors, and those who need our help to stay warm and safe this winter,” said federation development director Lee Rosenfield.

A highlight of this year’s program will be the 1 p.m. talk in the federation’s South River offices by two former Israel Defense Force soldiers, one of whom is an East Brunswick native. (Their full names are withheld for security reasons.) Karen lived in New Jersey until she made aliyah at 16. She served as a basic training commander and with the paratroopers.

The other soldier, Haitham, is a Muslim Bedouin who served with the Air Force and a unit operating the Iron Dome defense system, which protects Israel by using missiles to intercept incoming rocket fire from Gaza. The veterans are being brought by StandWithUs, a pro-Israel advocacy organization.

“This is what Israel is about, protecting both Jews and non-Jews,” said federation community relations manager Dan Rozett, an IDF veteran. “It’s just another reason to support federation. We make these things happens.”

Rosenfield said federation hopes to raise $250,000 on Super Sunday, which will go toward an overall campaign goal of $3.3 million to be distributed locally to day schools, youth and senior services, and other institutions serving the community. Additional funds will be distributed in Israel and to Jewish communities in need overseas.

Last year's Super Sunday and follow-up call nights brought in about $240,000 in pledges.

It's not too late to sign up to make calls! CLICK HERE to make phone calls to raise the critical dollars needed to support the Jewish community in the heart of New Jersey, Israel, and beyond.