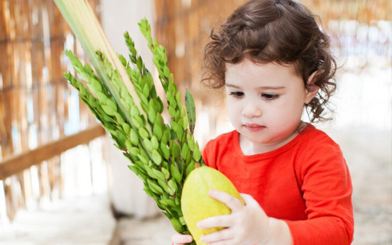 In FOUR SPECIES: ALL FOR ONE; ONE FOR ALL, Rabbi Osher Chaim Levene, says, ...the chosen people can only function where there is unity in their ranks. Only by "assembling" all parts of the people in a joyous harmonious unit, a "family reunion," can the Jewish nation fulfil its national role and achieve the ultimate level of unity: becoming one with G-d. Both are symbolized in the assembly of the Four Species.

The following article written by Miriam Perl and published by Canada's TorahHigh, explores the connection between the Four Species and Jewish unity.

What do our sages say about the importance of Jews embracing one another under one banner, as a people united? Quite a bit actually. Given that we are in the midst of the Jewish holiday of Sukkot, it is an opportune time for us to see what this holiday, in particular, says about Jewish unity.

At a time when the Jewish people are becoming more polarized and fragmented along political or religious lines, it is comforting to remember the underlying message of the four species-The Lulav (frond of a date palm), Etrog (citron fruit), hadasim (myrtle bough), and arovot (willow branch)–which we wave in our Sukkah during Sukkot.

The four species are certainly the most distinguished items in the sukkah. The Torah commands us in the Book of Leviticus, chapter 23 verse 40: “And ye shall take you on the first day the fruit of goodly trees, branches of palm trees, boughs of thick trees and willows of the brook and ye shall rejoice before the Lord your God for seven days.”

It is interesting that the etrog, which symbolizes both the person who studies Torah and fulfills mitzvot, does not stand alone in the fulfillment of this mitzvah. The etrog must be joined with the other species. That is a powerful symbol, to be sure: Every Jew, no matter, what his level of Torah knowledge or practice, must see his fellow Jew as forming a unity, each of us belonging to a collective that shares a Divine spark—all us created in His image.

SOLOVEITCHIK:
WE ARE INDIVIDUALS AND WE ARE A COLLECTIVE
It is all too easy to spend a cursory few minutes waving the Lulav and Etrog in six directions without concentrating on what it means. Too often, Jewish life can revolve around the practice of mitzvot that can become disassociated from its underlying meaning. However, the Torah reminds us repeatedly that this is not what God wants from us. Our sages, too, teach us, how this is far from the ideal. Rav Dov Halevi Soloveitchik (1903-1993), one of the most prominent scholars in modern times, discusses that the fulfillment of certain mitzvot can only occur with two steps. First, the external action, followed by internalizing the meaning.

How can the mitzvah of Lulav and Etrog be internalized? By internalizing the message of unity and the importance of belonging to a community. Let’s us return once again to The Rav, who says that forming a community with one’s fellow Jews is an intrinsic need of his personality. Man is both solitary and one who exists in a community. Both are essential aspects of existential humanity.

“In retreat or in togetherness - where does man find his true self?" The answer to the problem is rather a dialectical one, namely, man is both... In fact, the greatness of man manifests itself in his inner contradiction, in his dialectical nature, in his being single and unrelated to anyone, as well as in his being thou-related and belonging to a community structure."

As beings who contain a spark of the Divine, we are enjoined to connect to our Divine essence by modelling God’s actions. Just as He continually provides for us—no matter what we look like or what we do—collective Jewry must assume responsibility for each other.

On this Sukkot, let us join our families and communities in unity and ahava (love), remembering that we are all one body forming the entity of k’nesset Israel.