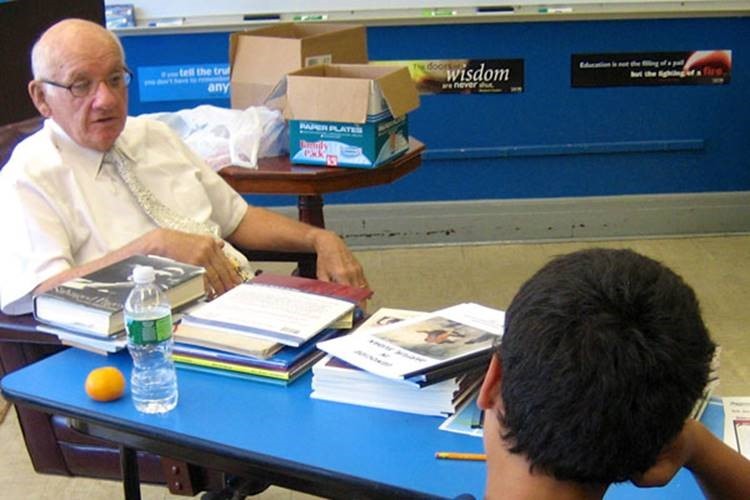 “On behalf of the NJ State Association of Jewish Federations and its member federation, the news that Dr. Paul Winkler has passed saddens all who have been in some way touched by his humanity, stated Gordon Haas, President of the State Association. “His voice may be silenced, but certainly the echo of his good deeds will live on to our collective benefit,” Haas noted.

“As Executive Director of the NJ Commission on Holocaust Education, Dr. Winkler has been a guiding light for many years here in New Jersey and nationally in furthering Holocaust education curriculum in our schools.  Many of us who have had the privilege of working with him on Holocaust survivor related initiatives have been touched by his devotion not only to education, but to making certain that the evils of the Holocaust would be remembered and never again repeated, Haas added.

Among the most difficult messages we send to one another are those that tell us of friends, colleagues or relatives who have passed away.  On July 12, 2016, Dr. Paul B. Winkler, whose soul is now at peace and whose legacy remains as a blessing to all of us who knew him and marveled at his extraordinary humanity, passed away.

Paul was formally involved in Holocaust/genocide education and prejudice reduction education since 1974.  This interest began during his youth and was developed, encouraged, and learned from his parents and grandmother through their community involvement.  Starting as a teenager and through the remainder of his adult years he was involved in social causes.  After completing his bachelor's degree in education, Paul began his educational experience as an elementary school teacher.  He also continued his own education, completing a doctoral degree in educational leadership at Fairleigh Dickinson University in 1974.

His educational activities of over 50 years included teacher, principal, superintendent, Regional Education Director, New Jersey Deputy Assistant Commissioner of Education for Exceptional Children at the New Jersey Department of Education, and Director of a Teacher Training Center.  He wrote many articles dealing with Holocaust and genocide education, including articles about "Darfur" published in the 2007 NJEA Review and about Terrorism and 9/11 in 2008.  His most recent publication is "Teaching the Unspeakable – The New Jersey Story of Holocaust/Genocide Education."  The book tells of the 30 year history of Holocaust/Genocide education in New Jersey.

During all of those experiences, Dr. Winkler coordinated Holocaust/genocide education in the State of New Jersey, sometimes as a volunteer, and then as a part-time employee after retiring in 1990.  The efforts have seen a council, and eventually a Commission on Holocaust Education established in New Jersey and the Holocaust/genocide mandate, which was signed into law in 1994.  Dr. Winkler, while coordinating all Holocaust/genocide activities, also trained teachers and made direct presentations to students.  Under his leadership, many collaborative efforts occurred including the Italian, Armenian and Amistad Commissions, as well as the Martin Luther King Commission.  Many curriculum guides were developed under his leadership regarding genocide from Native American to Darfur today.

He received numerous awards and citations including the Philip Forman Human Relations award from the American Jewish Committee of Central New Jersey, NJEA Humanitarian Award, the MLK Academy of Leaders Award, the outstanding educator award from ASCD, and numerous legislative acknowledgments from the New Jersey State Government.  In honor of his 70th birthday and over 50 years in education, his family, friends and colleagues established the Paul B. Winkler Endowment to be awarded to an elementary educator each year.

He is survived by his wife of 60 years, Cecelia, two children, Sharona and Jeffrey, five grandchildren, Elie, Sammy, Racheli, Adam and Amy, and one great grandchild, Celeste.