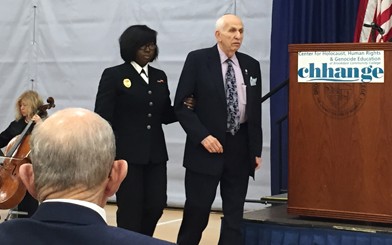 Thank you, Dale. And thank you all for being here today. My name is Lisa Karasic, I am the head of marketing and communications with Jewish Federation in the Heart of New Jersey. You may have noticed from your programs that I was not the Federation person originally slated to greet you. Our executive director, Susan Antman, sends her regrets as she was unable to attend. Susan would have brought a sort of credibility in speaking about the Holocaust that I do not. Both Susan’s parents and in-laws were survivors. I am your garden-variety, American-born Jew with grandparents who left Eastern Europe as children at the turn of the 20th century – an “everyman.” But as an everyman, I am glad to represent Jewish Federation, which itself represents the everyman, that is every Jew, no matter where they come from or what their story.

Yom Hashoah is a day of commemoration, a day of remembering. I remember, as a kid growing up in Ocean Township, my parents took me to what seemed like every last Holocaust lecture and film at the JCC (we called it the Y in those days). To me, those lectures and films were about something that happened a long time ago, something in the past.
For those of you who lived through the horrors and for the children and grandchildren of survivors, many of you have told me you not only “remember,” you live this history, in some way or some place inside you, every day. “Remembering” means something very different to you than it does to me.
And yet, as an everyman, I can tell you this Yom Hashoah feels different to me than those of my childhood. No one can equate recent acts of faith-based or ethnic- or racially-based violence with what you lived through then and live with now, but I wonder if there may be some common threads to consider. Perhaps some of the underlying beliefs and behaviors that made it possible for the Holocaust to happen may NOT just in the rear-view mirror. NOT be something simply to be remembered.
What stares us in the face today are the Chabad shooting in California this week and the Pittsburgh synagogue shooting a few months ago. The Sri Lanka bombings by religious extremists. Recent shooting of Muslims in New Zealand and Christians in Nigeria and Western Africa. Churches being burned down in the American South. And unfortunately, we don’t even have to look to faraway places. Last year, anti-Semitic flyers circulated through Long Branch and Red Bank; Rutgers University grappled with anti-Semitism among its administration and faculty.
So, what now?
A few years ago, at the CHHANGE COLLOQUIUM right here, I sat in with a group of high school students meeting a Holocaust survivor for the first time. The survivor had been a kid, himself, in Poland if I remember correctly, when the seeds of the Holocaust were budding. He remembered it all started with bullying, and it spread through by-standing – people standing by, not calling it out, not stopping it. He encouraged the kids of today: if you see bullying, if you see scapegoating, if you see injustice, hate, dehumanization, DO SOMETHING, SAY SOMETHING. DON’T BE A BYSTANDER.
Now, I cannot say with certainty that there are common threads between current events and the Holocaust. But it sure seems that way. And it seems those threads run strong and deep, not to be resolved quickly or easily. Many of you in this room would know far better than I.
But I AM proud to represent Jewish Federation in the Heart of New Jersey as an agent of change – that’s change with one h and a lower-case c. I can tell you that in the last 18 months, Federation has
I am grateful that THIS CHHANGE, the Center for Holocaust, Human Rights, and Genocide Education, is on the front lines promoting the elimination of racism, anti-Semitism and all forms of prejudice through education of students, teachers, law enforcement, clergy, even juvenile offenders of hate crimes.
I am reassured that Federation and CHHANGE have each other’s’ backs, we have good partners throughout the private and public sectors, and great supporters who are equally invested in the promise of NEVER AGAIN.
In a moment, we will hear from our keynote speaker, Agnes Grunwald-Spier, a survivor who chronicles women’s experiences in the Holocaust in her book of that name. Before this book, Agnes published The Other Schindlers, stories of 30 people in 10 different Nazi-occupied countries who rescued Jews in the Holocaust. Speaking of that book, Lord Jonathan Sacks, who was the Chief Rabbi of Great Britain, said, “Agnes’ work shows us that individuals can make a difference, take a stand against evil, and rescue…a vestige of faith in our common humanity.”
I stand here today as an average, garden-variety Jew – an everyman. But every man, every single one of us, can make a difference. We can all turn remembering into NEVER AGAIN. You’re doing it right now, just by being here. Thank you.
For a list of Yom HaShoah commemorations and events taking place in the heart of NJ, click here.