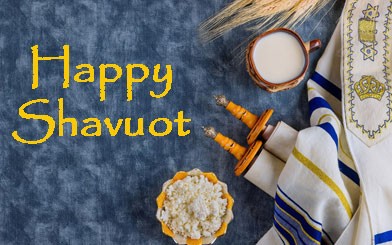 Before Passover someone probably asked you, “What are you doing for the holiday?” It’s less likely, however, that people want to know what you’re up to for the next major holiday – Shavuot. Estimates of the number of American Jews who celebrate Passover (with some form of seder) run as high as 85 percent. Not so Shavuot, which [in 2022, begins this Saturday night, June 4, and ends on Monday night, June 6].

Make no mistake, Shavuot is a big-deal holiday. It’s right there in Deuteronomy 16:9: “You shall count off seven weeks…Then you shall observe the Feast of Weeks for the Lord your God….” In Exodus, Shavuot is named as one of the Shalosh Regalim, the three pilgrimage festivals, along with Sukkot and Passover. “Shavuot is not as well-known as its biblical counterparts, Sukkot and Passover, because it lacks the distinctive physical rituals of those holidays, the sukkah and the Seder, and because it lacks the at-home celebrations of the other two,” says Rabbi Daniel Liben of Temple Israel of Natick, MA, near Boston. “Also, the fact that it falls in the late spring, often after Hebrew schools have finished their calendar year, doesn’t help...”

It’s a shame that Shavuot has a relatively low profile in the non-Orthodox community. In addition to its multiple layers of meaning, Shavuot involves traditions and customs to engage all ages and levels of observance.

Shavuot is best known as the celebration of the revelation at Mount Sinai: Chag Matan Torateinu, the Festival of the Giving of Our Torah. The Torah’s account of the revelation and the Ten Commandments are read at Shavuot services, as is the Book of Ruth. The story of Ruth takes place at harvest time, and Ruth’s conversion to Judaism parallels the Israelite’s acceptance of Jewish law. King David, a descendent of Ruth, is said to have been born and died on Shavuot.

Since the counting of the omer ends on Shavuot, seven weeks from the second seder, the holiday is also known as the Festival of Weeks (Shavuot is Hebrew for “weeks”). In biblical times, the seven weeks also marked the transition in Israel from the spring grain crop of barley to the beginning of the summer grain harvest of wheat. Thus, the holiday has yet another name, Chag Ha-Katzir, the Festival of the Harvest. It is also called Chag Ha-Bikkurim, the Festival of the First Fruits; Shavuot commemorates the harvest of the first fruits in Israel, which were brought to the Temple in Jerusalem. In recognition of this, the bima is decorated with baskets of fruit and flower, sometimes prepared by religious school students.

As with other major holidays, work is proscribed. The tradition of all-night Torah study, Tikkun L’eyl Shavuot, followed by early morning prayer, dates back to the 16th-century mystics of Safed. A midrash relates that on the morning of the revelation, the Israelites overslept and almost missed their meeting at the mountain. Study affirms our commitment to Torah and helps to atone for this near-disaster. Some synagogues host all-night study, while others sponsor late-night speakers. In early European Jewish communities children began their study of Torah on Shavuot. A Hebrew verse was written on a slate covered in honey to impress upon them the sweetness of studying Torah.

Tradition also teaches that at midnight on Shavuot the heavens open for a moment and in that moment God answers all prayers.

Some congregations cover Torah readers with a chuppa (bridal canopy) and honor recently married couples. Shavuot is analogized to a wedding between God, the groom, and Israel, the bride, with Torah serving as the ketubah, the marriage contract.

Shavuot dining features dairy meals; favorites include blintzes and cheesecake. An obvious reason is that Israel is described in the Torah as “a land flowing with milk and honey.” Tradition also teaches that when Israelites received the Torah they were not prepared to follow all of the dietary laws, so they limited themselves to dairy.

Whether or not Shavuot has been part of your spiritual celebrations, there are plenty of opportunities to observe and enjoy this holiday. “I would encourage someone who is looking to connect to Shavuot to find a Tikkun L’eyl Shavuot in their community – the tradition of a late-night, or even all-night study session on the evening leading into the holiday,” says Rabbi Liben. “This mystical custom, which has gained popularity in recent years, addresses people’s desire for hands-on, peer-to-peer exploration of Jewish texts and can make Shavuot’s theme of Revelation come alive.”

Adapted from Jewish Boston May 29, 2017 column by Ann Green, whose work has also appeared in Woman’s Day, Erma Bombeck Writers’ Workshop, The Jewish Advocate, Boston Herald and many other journals and periodicals, and who co-authored the discussion guide for the Alan Dershowitz documentary film “The Case for Israel,” shown worldwide.