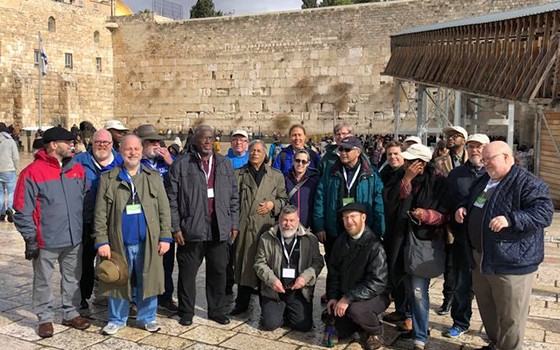 The multiple narratives heard by members of the recent Interfaith Clergy Journey to Israel underscored their own respective divergent views of the country. Yet the group of 20 Christian, Muslim, and Jewish religious leaders came home as ‘a brotherhood and sisterhood’ intent on nurturing mutual understanding and hope in their respective New Jersey communities.

Many of the participants, in fact, viewed the Jan. 17-24 mission, sponsored by the Jewish Federation in the Heart of NJ, as life-changing.

“It was everything I prayed for and more,” said Rabbi Marc Kline of Monmouth Reform Temple in Tinton Falls, who serves as the federation’s interfaith chair and who chaired the mission with federation executive director Keith Krivitzky.

“We wanted to debunk the myths that are out there on both sides regarding Israel,” said Kline. “We had some honest conversations about where we intersect as faith leaders and where we don’t. Without exception, everyone has figured out we are a lot more alike in faith than they had previously thought.”

Krivitzky said the mission was designed to give participants a behind-the-scenes look at what life is like in Israel and the West Bank, beyond what they see in the headlines or on social media.

“By spending quality time in Jerusalem and touring the holy sites, the clergy got a balanced look at the realities of life in a challenging neighborhood,” he said. “The overwhelming impression was that the political situation between Israelis and Palestinians is complicated, and that overly simplistic answers and movements seeking to impose sanctions or punish one side are generally not helpful to promoting peace.”

The fellowship among the clergy members was palpable. NJJN met up with the group in Tel Aviv on the last day of the mission, as intense discussions about politics and faith were infused with liberal doses of humor.

“We are brothers of different mothers,” said Kline as he draped his arm over Mustafa El-Amin, imam of Masjid Ibrahim in Newark.

The mission, El-Amin said, enabled him to carry out the Koran’s directive to travel and learn about other faiths and cultures. “‘We have made you tribes and nations that you will come to know one another,’” he said, quoting from the Koran. “When we say ‘peace be with you’ in Arabic, we say it in the plural to remind us that no man walks alone.”

The imam marveled at the convergence of the sacred sites.

“It was breathtaking for me to overlook the city of Jerusalem and see the Dome of the Rock, the Western Wall, and the Church of the Holy Sepulchre next to each other and to hear the Muslim call for prayer and the church bells,” El-Amin said. “To see these holy sites alive with activity so close to each other raised the hope that the peace we all yearn for will one day be realized. There’s no other place like this on the face of the earth.

“We cannot apply the same rules of logic that we apply anywhere else,” he said.

El-Amin was fascinated by the ritual observances of Shabbat. He said he was especially tickled by the Sabbath elevator in their Jerusalem hotel that automatically stopped at every floor. “It took me back to when I was 10 years old, walking in Hillside near a synagogue when a rabbi came out and asked me if I could turn on a light. I never really completely understood it until now.”

For Zaniel Young, senior pastor of Shrewsbury Avenue AME Zion Church in Red Bank, the trip “molded my ministry and changed my life.”

“It helped me to understand the genesis of all our faiths from a clearer perspective because it all starts here in the Holy Land,” he said. “I can go back to New Jersey and preserve the narrative of Israel, to help set the table for a new conversation about its struggles and challenges.”

Young said the most emotional experience for him was visiting Yad Vashem-The World Holocaust Remembrance Center in Jerusalem, particularly the children’s memorial. And the Church of the Annunciation in Nazareth was the most meaningful highlight of his ecumenical journey. “Each of us brought a different perspective and meaning, and that conversation will continue.” He said the aim of that continuing dialogue is clear. “We’ve created a brotherhood and sisterhood pact that will be able to provide hope for others.”

“One of our main missions is that if we hear any hateful comments or actions, we will stand up for the other,” said Chaudry, president of the Islamic Society of Basking Ridge and former mayor of Bernards Township. “Last year when there were threats against the JCCs, about 28 Muslims went to services at Congregation B’nai Tikvah in North Brunswick to stand in solidarity with the Jewish community. In December 2016 we had the entire New Jersey Senate take the pledge to challenge bigotry.”

Chaudry is also a cofounder — with Kline — of the New Jersey Interfaith Coalition, which currently has 150 member organizations from all faiths.

“We are all human beings, all creatures of God created in his image,” he said. “We are either brothers in faith or brothers in humanity.”

For Rabbi Robert Pilavin of Congregation Sons of Israel in Manalapan, the mission provided a unique perspective on Israel.

“We are reminded of the fact that there are multiple narratives out there. The creation of the State of Israel in 1948 is a day of glory and a wonderful moment in Jewish history, but on the Palestinian side it is referred to as Nakba, or Day of Catastrophe,” he said. “We couldn’t have more diametrically opposed views of what a particular event in history means.”

Pilavin said he and his colleagues enjoyed cross-referencing their practices and beliefs and sharing each other’s expertise at their respective holy sites. “On Shabbat morning I took Christian colleagues to two different synagogues in Jerusalem, both Orthodox and Conservative services. I gave them what I lovingly refer to as a ‘pray-by-pray,’” the rabbi said. “I can’t overemphasize the importance of sharing a table and breaking bread with people of different faiths and political persuasions and creating bonds of friendship that we hope will transcend the trip.”

Seeing Israel through the eyes of her peers was remarkable, said Rabbi Sara Metz of Congregation Beth Mordecai in Perth Amboy. “I wanted to learn more about Israel through an interfaith lens and bring back to New Jersey an interesting multitude of voices. Some of the clergy members dreamed about touching the water of the Sea of Galilee or the ancient stones,” she said. “I couldn’t help but think back on the 2,000 years my ancestors have dreamed of the Land of Israel and how this dream has become a reality.”

Pastor Ernest Brodie Jr. of Robertsville Bible Church in Morganville said, “Everyone is claiming to be the original settlers of this ancient land. Someone once told me a happy solution is when no one is really happy, but everyone is satisfied. Jesus said, ‘Blessed are the peace makers.’ Our job is to bring peace in our own communities.”