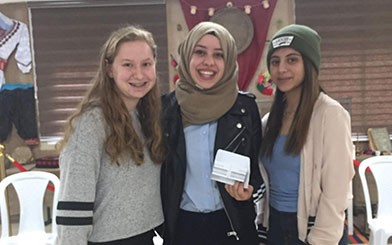 Sarah Schildkraut, a local teen, recently participated in Write On For Israel, a competitive two-year leadership training and Israel engagement program for high school students sponsored by the Jewish Week. Federation is proud to promote our partners' Write On For Israel program among the teen leadership development and Israel advocacy initiatives made available in the heart of New Jersey. This program empowers teens to become leaders and influencers in the pro-Israel community when they get to college. Sarah shared the following speech with her synagogue detailing her experiences.

This past February I went to Israel for a week with Write On For Israel, a competitive two-year leadership training and Israel engagement program for high school students sponsored by the Jewish Week. In this program, we learned about current events related to Israel and the wider Middle East and how to navigate complicated conversations about Israel, especially on college campuses.

The purpose of this trip was to hear the different narratives of Israel. Often, it’s only painted as being between Jewish Israelis and Palestinians, but it is so much more complex than that.

Throughout the week, we participated in a diverse variety of activities, ranging from meeting with top journalists and authors, an IDF commander, a Druze family, a Palestinian activist, a Supreme Court justice, government officials, and Israeli Jewish and Arab teenagers. These experiences presented us with a wide spread of opinions from various groups of people.

Several people we spoke to, including authors and journalists Yossi Klein Halevi, Khaled Abu Toameh, and Micha Goodman, had views that supported Israel, but also challenged parts of it at the same time. All three of these speakers were very informative and supportive of working towards a peaceful solution.

We visited an IDF base and saw them practicing a tank drill. It was really cool to see that take place, but unfortunately, I’m not allowed to say anything more about it. Later that day, we stood on top of a hill, less than a mile away from Syria. The only thing in between us was an expansive grassy field and a fence. But I felt safe nonetheless. Yaakov, an IDF captain who had accompanied us that day, pointed out two towns on the border to us. He proceeded to tell us that up until six months before, one of those villages was occupied by Daesh (ISIS), the other by Al Qaeda. You used to be able to see rockets flying from one town to the other in the very spot where we were standing.

I found that the time we spent in Judea and Samaria was the most surprising. Despite all of the stories I’ve heard, we sailed through the checkpoint and into what had always been described as a war zone. It was a nice day, and the sun shone on the beautiful green valleys where Rachel had walked, thousands of years before. Perhaps the most chilling thing about it was as we drove past a bus station, our guide told us that it was where the three boys – Eyal, Gilad, and Naftali – had been kidnapped nearly five years ago. Even more chilling – if possible – was driving right past the spot where my friend’s cousin, Ezra, was killed just a few years before while on a gap year in Israel. It was weird to drive right past places where terrorists had acted out of hate, and even weirder that I still felt completely safe. Later on, when we were taking a small hike near a settlement, I again felt completely safe, as if doing something as simple as that in a place like this was ordinary. We walked past a few women and their children, and I exchanged a “salaam alekum” with them, never feeling any sense of hatred, fear, or animosity that the media so often portrays.

That being said, that doesn’t mean that there is never any fear of hatred in that area on the West Bank of the Jordan River. All communities are faced with conflicts of various types.

Another amazing experience was when we met with Israeli Arab teens from Baqa Al-Gharbiye, an Arab city which is northwest of Netanya, sitting right on the edge of the Green Line, separated from Baqa Al-Sharquiya, which was once a part of the same city. We met with four girls around my age, Salam, Suma, Tasneem, and Afnan. They all go to school or are pursuing careers. Afnan listens to hip hop. Tasneem’s favorite ice cream flavor is caramel and she likes Zac Efron (an American actor). Suma likes to go to the gym and finds school boring. Things that my friends and I do and can relate to.

We also went to one of the Arab elementary schools where we spoke to some of the teachers and met some of the younger students, who prepared a small presentation in English to welcome us. Immediately, a group of young girls started to introduce themselves and ask me questions. They were all so excited to play with us for a few minutes at the end of our visit.

All of the people I met in Baqa were amazing, however, I really bonded with Tasneem specifically. I’m still in contact with her. We don’t speak as often as I’d like, since we’re both busy, but I wonder how her job in the pharmacy in the Jewish city is. I wonder if people are treating her differently because she chooses to wear a hijab. I wonder if she’s going to college yet to pursue studying diplomacy and law.

As Tasneem and I pursue our plans in life, we remain hopeful for a peaceful future, where everyone can coexist peacefully, and where we can share our customs and cultures. After all, we are people with similar hopes, even if some of our beliefs may differ.

We also had the opportunity to volunteer at Save A Child’s Heart in Holon. SACH takes kids with heart conditions from developing countries and treats them free of charge. All of the kids were so adorable, and despite the fact that they were preparing for or had just had major heart surgery, they all had big smiles as well. SACH’s mission was similar to that of Operation Good Neighbor on the Syrian border, to help others, no matter their race, religion, nationality, or status.

Despite its complexities with many diverse communities, it’s all Israel, our home.

I would like to thank the Jewish Federation Heart of New Jersey for helping to make it possible for me to participate in this amazing program and trip.