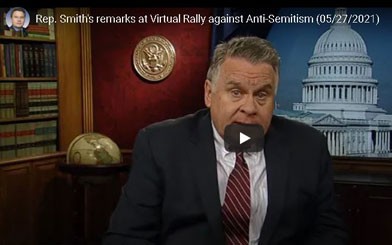 "The unprovoked massive Hamas missile attack on Israeli civilians earlier this month was an act of extremist terrorism and the loss of Israeli lives was only mitigated by the Iron Dome missile defense system and a justified counter attack by Israeli defense forces." Rep. Chris Smith (NJ-4) shared these words, among others, today at the #ActAgainstAntisemitism rally and in an editorial published in New Jersey Globe.

Jewish Federation in the Heart of NJ thanks Representative Chris Smith (NJ-4) for his editorial and remarks in speaking to thousands of viewers as part of the "Day of Action Against Antisemitism." Rep Smith expressed support for Israel and spoke out against the recent surge of antisemitism around the country and the world.

The United States government and the international community must do all they can to combat antisemitism and we are grateful for all our leaders who have expressed that there is no justification for violence against Jews.

Now is the time to take action!

Rally Against Anti-Semitism
By Congressman Christopher H. Smith, May 27 2021

I strongly believe that the explosion of anti-Semitism in the United States and worldwide must be exposed and rigorously combated.

Two decades ago, the great Jewish human rights leader and former political prisoner in the Soviet Union Natan Sharansky testified at one of my congressional hearings on combating anti-Semitism and said “…there are two important components in this new phenomenon of anti-Semitism. One is using an anti-Israeli campaign for strengthening anti-Semitism and the other is classical anti-Semitism—the old, deep, primitive prejudices against Jews.”

Mr. Sharansky, proposed a simple formula for exposing anti-Semitism masquerading as mere policy differences with the nation of Israel and called it the 3D test: demonization, double standard and delegitimization.

All three manifestations of anti-Semitic hate are on full display today as violence against Jews erupts on America’s streets and throughout the world.

The unprovoked massive Hamas missile attack on Israeli civilians earlier this month was an act of extremist terrorism and the loss of Israeli lives was only mitigated by the Iron Dome missile defense system and a justified counter attack by Israeli defense forces.

Israel—like every other nation on earth—will never allow its people and cities to be destroyed by thousands of missiles without deploying whatever it takes to stop the violence.

Anti-Semitism in the United States—which had already been worsening according to the FBI, more than 60% of all anti-religious hate crimes in the U.S. are directed against Jews—is now exploding as never before.

People of conscience must stand in solidarity with our Jewish brothers and sisters against this rising tide of hate.

Our words and deeds must be clear and bold.

We must absolutely reject anti-Semitism in all of its ugly forms.