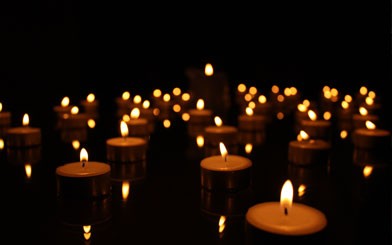 Following Pittsburgh Synagogue Shooting, Jewish Federation Redoubles Efforts to Stem Hate and Step-Up Security... With heightened concerns about growing anti-Semitic violence, the Jewish Federation is increasing community-wide leadership to stem anti-Semitism and secure Jewish facilities, according to Keith Krivitzky, CEO.
In the coming days, the Federation will conduct a leaders’ briefing for representatives from all synagogues and other Jewish organizations in Monmouth and Greater Middlesex counties. The purpose is to understand precisely what happened in Pittsburgh and what this local Jewish community must learn and do to enhance security awareness and preparedness. The session will be led by a senior official with Secure Communities Network, an affiliate of the local Federation’s parent organization: Jewish Federations of North America.
A Record of Responding to Hate
From the recent Pittsburgh synagogue attack to the appearance of anti-Semitic graffiti and flyers throughout Monmouth and Greater Middlesex counties in recent months, the Jewish Federation has been helping local Jewish organizations respond. Working with schools, interfaith clergy, and public safety partners, Federation-led, promoted, and supported programs have been educating children and adults – including educators, public safety, and government officials, as well as Jewish communal and interfaith security professionals and volunteers – to reduce hate, anti-Semitism, and bullying.
“Inroads have been made,” Krivitzky said. “Productive conversations at Rutgers University about anti-Semitism among educators and administration officials are one of many examples where the Federation’s involvement is making an impact
.
Still more needs to be done.”
Securing Spaces
The Jewish Federation's Security Task Force will increase engagement with security leads from synagogues and other Jewish organizations to enhance awareness and preparedness at Jewish facilities, including planning, exercises, and vulnerability assessments, as well as coordination on grant applications for funding systems, equipment, and personnel. To date, the Federation has helped bring more than $3 million in security funding from various Federal and state sources, as well as from the Federation, itself -- some 80 grants to 50 local Jewish organizations -- in three years.
“More training, systems, and equipment are needed,” according to Amy Keller, the Federation’s liaison  with its Security Task Force and partners’ security contacts.
“In the wake of the Pittsburgh attack,” Keller said, “the Federation’s close working relationships with public safety and law enforcement bodies are providing the Jewish community with enormous support.¬ These include ¬federal and state Homeland Security authorities, the FBI, Monmouth and Middlesex County Prosecutors’ and Sheriffs’ offices, the NJ Office of the Attorney General, NJ State Troopers, municipal police departments and school districts, and local, state, and federal elected officials.”
Awareness and Preparedness
Through its network of subject matter experts, the Federation is scheduling additional training and awareness programs for community members and professionals, among them:
Funding Action
“Making the Jewish community more peaceful and secure takes resources,” noted Krivitzky. The Jewish Federation has launched a special fundraising campaign: Campaign to Combat Anti-Semitism and Enhance Community Security. Krivitzky cited the types of programs and impact donations will fund. While emphasizing these types of initiatives already take place and have resulted in improvements across the Jewish community, he noted more are needed:
For more information about the Jewish Federation’s security and bias-related work, go to jewishheartnj.org/crisis.
The Jewish Federation in the Heart of New Jersey strengthens the entire Jewish community – making it more caring, connected, and committed to addressing the issues it faces today and for the future. Central to its work are caring for the vulnerable; connecting people to each other, to communal resources and experiences, and to Israel; responding when crisis strikes; and cultivating a stronger sense of collective responsibility for tzedakah (justice) and tikkun olam (repairing the world). The Federation grants more than $4 million annually to partners and programs meeting critical needs from hunger and mental health to education and safety throughout Monmouth and Greater Middlesex counties, as well as Jewish communities around the world.