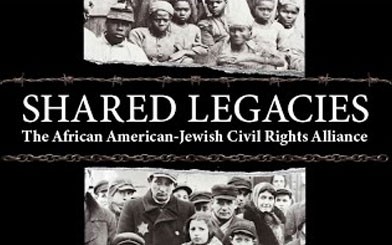 Last week, in honor of Martin Luther King Day and Black History Month, Jewish Federation, Monmouth Reform Temple, and Axelrod Performing Arts Center partnered to present "Shared Legacies" by Menemsha Films. The film reflects on the crucial historical lessons from Black-Jewish cooperation in the Civil Rights Movement and is meant to inform and inspire us in combating hate today.

After film screening, leaders from the Jewish and Black communities in the heart of NJ came together for a community-wide panel discussion. The panel discussed key issues mentioned in the film such as, unity, empathy, and partnership, and how freedom and equality for all can be achieved only when people come together to support each other in calling out hate and “seeing human.”

Historically, Blacks and Jews experienced their respective tragedies. Both have been enslaved, Blacks much more recently, and as it was said in the film, “once a culture is enslaved it never leaves you – the vulnerability remains - but so does the promise that we can free.”

“I am frequently asked why Jewish Federation invests in relationship building outside the Jewish community”, said Dan Rozett, Federation’s Manager of Community, and Israel Engagement, “and my answer is always the same, one group alone cannot end hate and threats against it. Persecuted groups need allies outside themselves.”

Rabbi Marc Kline, of Monmouth Reform Temple and Jewish Federation Chair of Interfaith Initiatives, said “we’ve forgotten our joint histories and our joint responsibilities to each other.” It is this responsibility and the quest to be free and to make sure others are not oppressed that unites our two communities.

The film mentions the need for friendships to overcome inequality based solely on what people have in common without regard for race or color.

“If we boil life down – at the core, there are friendships,” said Pastor Kerwin Webb, Minister at Second Baptist Church of Asbury Park, and President of the Greater Red Bank branch of the NAACP, “and we need to see beyond the difference, beyond anything unfamiliar and see each other as human.

This is the key that opens the door to building relationships. However, once in the door it is critical to understand each other’s pain to create everlasting bonds and to do that, Blacks and Jews must be in close proximity to one another.”
“When we can all see each other’s pain, we can see our commonality as human beings” said, Rabbi Eric Rosin, of Congregation Neve Shalom in Metuchen. “We need to build the relationships before you can feel that pain.”

“Our parents did not share with us their pain and experience”, said Reginald Johnson, President of the Metuchen - Edison branch of the NAACP, and Agent, Middlesex County Prosecutor’s Office Bias/Community Outreach Unit, “the bond [between Jews and Blacks] was not passed on.”

This caused a disconnect of more than 40 years among Jews and Blacks to the point where Jews are seen as “white” -- unable to be trusted instead as being seen as an ally. In the best-case scenario, Jews were viewed as a group that was doing something “for” the Black community and not “with” the Black community,” a less than ideal way to build a relationship.

“We operate in silos,” said Minister Webb, and “opinions are formed from rumors and stereotypes.”
What is next for the Black – Jewish coalition and who will lead? Are both communities waiting for another Rabbi Heschel, Dr. King, or Gandhi?

“These leaders could not have done anything without people on the ground,” said Rabbi Kline. “Somehow we have waited for some messianic figure to come in and say someone will do that or this; forgetting that, that someone is me.”

Change comes when the people get involved, rise to the occasion and lead, explained Rabbi Rosin. “It is a copout to say that they [Rabbi Heschel, Dr. King and Gandhi], are superhuman and that we can never rise to that level,” he added. “It is time to act, together.”

‘Sharing our stories with our children,’ says Mr. Johnson, ‘is an important first step to uniting our communities.”
Once Jews and Blacks understand that the two communities care about the same issues and have common values born from a similar past, working together will come naturally.

A forgotten moment during the Civil Rights Movement is a letter written by 17 rabbis who were arrested in 1964 in St. Augustine, FL, for assembling in an integrated group as a protest against racial segregation, discrimination, and violence. With Jews only 20 years from the Holocaust, the trauma and betrayal was fresh and unbearable.

“We came [to St. Augustine] as Jews who remember the millions of faceless people who stood quietly, watching the smoke rise from Hitler’s crematoria. We came because we know that second only to silence, the greatest danger to man is loss of faith in man’s capacity to act.”

Jewish Federation’s Jewish Community Relations Council will continue to work to combat bias and hate together with any group who shares the same values to pursue justice, fight for rights and equality for all people – and most importantly recognize the need to see all as humans.

If you are interested in being a part of these efforts, please reach out to Dan Rozett at danr@jewishheart.nj.org .