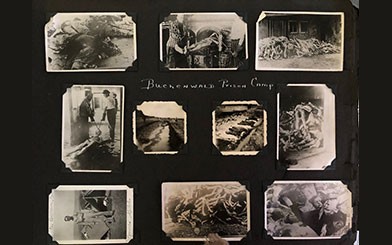 Today is the 75th anniversary of D-Day, now commonly referred to as the beginning of the end of WWII.

We are reminded just how Great – with a capital G – a moment in history this was, and not just for those countries and peoples involved in the war, but for all mankind.

On behalf of the entire Jewish community, Jewish Federation in the Heart of New Jersey extends our utmost gratitude to those who served in the U.S. and Allied military forces, and their families, who gave of themselves – too often, gave all – to the war effort.

This morning, our own Jewish Federation donor relations specialist, Kelly Scarano, brought in a photo album made by her maternal grandfather, the late Harold Haas of Woodbridge, NJ, who took part in the D-Day invasion . (Pictured here receiving the Bronze Star, Sgt. Haas also was the recipient of a Purple Heart.) 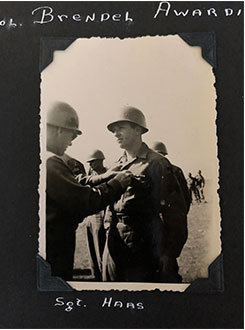 As she lovingly turned each brittle, black page of her grandfather’s photo album from the war, Kelly shared priceless documentation of both tragedy and triumph, from the gruesome and heart-breaking images captured when U.S. forces entered Buchenwald to a leisurely pose in front of the Eiffel Tower. (This is the first time many in our office have seen Holocaust pictures in someone’s own personal photo album, as opposed to in a museum or book or on a website or projection screen during a lecture). 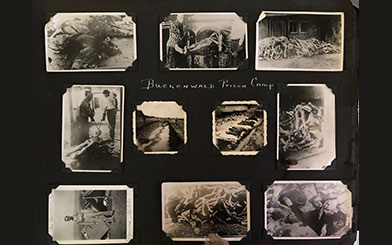 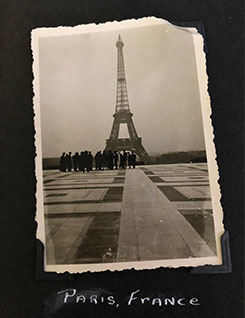 “I really should do something with this because it’s falling apart,” Kelly said, referring to the deteriorating condition of the album. “But my grandfather touched this.” Harold Haas passed away at the age of 59. 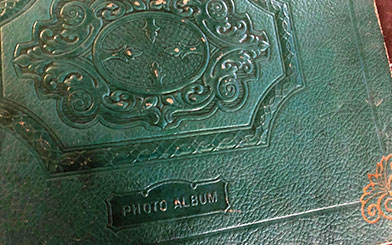 As with Kelly’s grandfather’s album, memory of D-Day becomes increasingly more fragile with each passing day.

We are grateful to Kelly for sharing this priceless personal family heirloom and important piece of world history with us.

We are indebted to Kelly’s grandfather, Harold Haas, for his heroism on D-Day and throughout his service, and for bearing witness to the horrors of the Holocaust.

And we are dedicated to keeping these memories alive, so days like June 6, 1944 never need to happen again.

As the world commemorates the 75th anniversary of D-Day, Jewish Federation invites supporters to join us September 8-17, 2019, for an extraordinary Jewish heritage tour of Normandy and Pairs, exploring the rich past, present, and future of Jews and Jewish life in France.

Standing on the bluffs of D-Day beaches, exploring the stories behind the monuments and memorials of the region, is only the beginning.