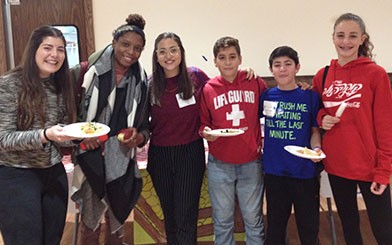 The Jewish Federation in the Heart of New Jersey, held the first ever Israel Teen Summit hosted by Rutgers Hillel together with Jerusalem U, StandWithUs, AIPAC, IAC, BBYO, USY and others and was made possible due to generous support from the Laurence S. Weiss And Edith G. Weiss Foundation Inc.

One hundred and twenty teens from all over Middlesex and Monmouth counties gathered for a day to experience Israel themselves, with their peers, enjoying an Israeli Shuk (marketplace), created by members of the teen planning committee together with our Shinshiniot, Dana Zachar and Maya Shany,  with food, photo ops and free gifts from Israel plus a selection of activities and sessions including advocacy, lobbying, sports, food, innovation, music and dance.

The goals for the summit were to connect teens in our community to Israel and improve their knowledge as well as provide basic Israel advocacy tools before they get to college.

Shelly Nezaria, a senior at East Brunswick Highschool, a Federation Israel Teen Grant recipient and Israel summit teen planning committee member set the tone for the day with her opening remarks to the teens: “I sincerely hope that our conference today gives you all a glimpse of what Israel is and truly stands for. Hopefully some of you may even be inspired to visit Israel soon, if possible. Israel is an astounding country, a special place to live, with worlds of opportunity. I hope all of you get the chance to go someday."

After an energizing opening session led by Chloé Valdary, Brand Ambassador at Jerusalem U, and a leading voice in the pro-Israel movement, the teens participated in two sets of breakout sessions. The first set of sessions included Israel 101, prepared and facilitated by members of the teen planning committee, an interactive presentation of the IAC ACT.IL NJ Media Room, an effort to build an organized online community of pro-Israel activists, Antisemitism vs Legitimate Criticism facilitated by StandWithUs, where teens learned to decipher between anti-Israel sentiment and legitimate criticisms of Israel while learning speaking techniques helping them defend Israel against these anti-Israel remarks, and an activity led by the AIPAC Early Engagement department, where students learned about lobbying for Israel and what pro-Israel students can do to engage members of congress, candidates, and community leaders.

The second set of sessions, developed and facilitated entirely by the Teen Planning Committee, included fun and engaging sessions such as Israeli Sports, where teens participated in a mock Maccabi games while learning about the best Israeli athletes, an Israeli cuisine cooking session, learning about different Israeli food and playing a Master Chef game, Teen Life in Israel, hearing about life as a teen in Israel, Israeli Music and Dance, jamming out to Israeli songs, and learning about Israeli music and an Israeli Defense Forces session, learning about the different units in the IDF, Krav Maga, the IDF self-defense and fighting system, as well as engaging with a former IDF Special Forces soldier and Krav Maga instructor to hear about how the IDF is different from all other military organizations in the world.

Inbar Singal, Manager, Community Engagement at Federation responsible for teen engagement had this to say about the young volunteers: “The teen committee did an amazing job. The group has been planning and working on organizing this conference to the smallest detail for months. We were very lucky to work with a group of smart, mature, responsible and enthusiastic teens, who volunteered because they wanted to bring Israel to other teens in the community. We wanted it to be a teen led program, because we believe that that’s the best way to engage teens and to develop community leadership among the younger generation.”

For parents, Rutgers Hillel Director, Andrew Getraer provided an update on anti-Semitism on campus, along with advice and tools on how to help and support their children when such events occur.

Andrew Getraer, Executive Director, Rutgers Hillel says, "At a time when so many parents are concerned about the climate for Jewish students on campus, we were able to have a lengthy and intense discussion about the realities of campus life today. The challenges are real, but the quality of Jewish life on most campuses has never been better."
Sharon Lipson, whose daughter Lyndsey was on the Israel Summit teen planning committee and a senior at East Brunswick High School, stated that, “as the parent of a high school senior who will soon be making a decision about the right college and Jewish community for her, the information provided by Andrew Getraer was invaluable. He provided critical insights into how to assess Jewish life on college campuses and on how to contextualize the challenges our students may face on campus.”

Danna Nezaria mother to East Brunswick high school students, sophomore Mathew and senior Shelly, and middle schoolers, Natalie and Annie, who also attended the Israel Summit, said that “parents were captivated listening to Andrew Getraer speak about the climate at Rutgers, and all that the Hillel has done to support its Jewish students. I was especially impressed to hear the effective steps that Rutgers Hillel has taken to combat antisemitism and anti-Israel sentiment on campus. If I had any hesitation about sending my daughter to Rutgers, he completely assuaged those concerns.”

The Jewish Federation is dedicated to connecting Jews in the heart of NJ with the land and people of Israel, strengthening the Jewish family worldwide. The Federation fosters ways to learn about, bond with, and care for Israel that are fascinating, meaningful, and fun and is proud to support people of all ages and interests in building bridges with Israel.

Federation CEO, Keith Krivitzky: “It is more important than ever these days that young Jews understand why their extended Jewish family, and the family homestead in Israel, are important and can help enrich their lives. This conference was about helping teens in our community discover their own connections and ‘why's.’”

For photos of the event, visit the Facebook photo album.

For more information on opportunities to connect with Israel and for ways to involve teens in Jewish life contact Dan Rozett at danr@jewishheartnj.org or Inbar Singal at inbars@jewishheartnj.org.