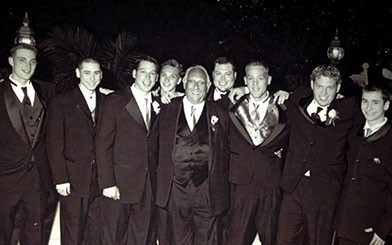 Aliza’s oldest son, Marc, is not like her others. And knows it.

The 17-year-old is on the Autism spectrum. Aliza says, “He’s not really high functioning, and not really non-verbal. He’s in the middle. ”

For most of the year, Marc attends a state-funded private school. Summers, however, have always been a challenge with no other activities that are safe and affordable.

That challenge was answered when the whole family went to visit one of their other children at
a Jewish overnight camp and the director showed them its camp within a camp, for children with special needs.

Finally, Aliza hoped there’d be a summer activity for Marc, and Marc was thrilled he might get to go to the same place as his sibling.

But caring for a child with special needs is costly and the family soon learned they could not afford it. Aliza contacted the Jewish Federation in the Heart of NJ, and learned the Stolzer Family Fund for Children with Special Needs could help.

Begun in 1999 by Herbert Stolzer, the fund has helped more than 225 children with special needs be part of the joyful Jewish community of camp – now including Marc.

Aliza says, “He’s so happy at camp, and when he gets back, he has more confidence. He even Skypes with his counselors.”

Aliza and Marc never met Herb Stolzer, who died in 2013 at the age of 87, but they know their lives are better because he left a legacy gift to the Jewish Federation so young people of all abilities would have a place in the Jewish community.

One of Herbert Stolzer’s eight grandchildren, David Stolzer, says, “My grandfather was incredibly generous, but he did everything quietly. We only learned of his philanthropy from eulogies at his
funeral and stories during shiva.”

The grandchildren wanted to find a meaningful way to continue their grandfather's legacy. So they agreed that each would make an annual contribution to the Stolzer Family Fund for Children with Special Needs.

“We live all over the globe, so we don’t get to see each other often,” said David. “This is something we do together even though we’re apart.”