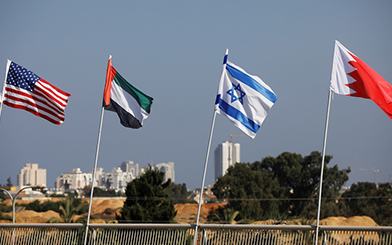 Today, The Jewish Federations of North America’s chair of the Board of Trustees Mark Wilf, and President and CEO, Eric Fingerhut joined nearly 1,000 guests on the White House Lawn to witness the historic signing of the peace accords between Israel and the United Arab Emirates and Bahrain. Israeli Prime Minister Binyamin Netanyahu‏‏ will meet with U.S. President Donald Trump prior to the ceremony, followed by a four-way meeting between Trump, Netanyahu and the foreign ministers of the UAE and Bahrain, Abdullah bin Zayed Al Nahyan and Abdullatif bin Rashid Al Zayani, who are signing the accords for their countries.