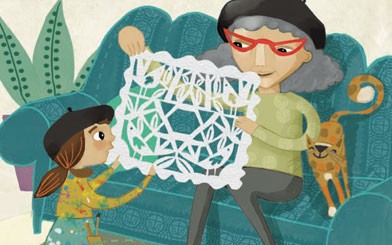 Why some synagogues use paper-cuts as decorations, how Israelis celebrate with water, and other lesser-known facts about this springtime holiday.

Along with Passover and Sukkot, Shavuot is one of the three major Jewish pilgrimage festivals. It falls out precisely 49 days after the second day of Passover, a period of time known as the Omer, and marks the giving of the Torah to the Jewish people on Mount Sinai.

Here are nine things you might not know about this springtime holiday.

1. Shavuot is the holiday of Jewish paper-cutting

Shavuot is a springtime festival, a period when the earth is coming into full bloom (in the northern hemisphere anyway). One Jewish legend recounts that Mount Sinai burst into flower with the giving of the Torah. In ancient times, Shavuot was also the time of bikkurim, when Jewish farmers would bring the first fruits of their crops as an offering to God in the temple. For these reasons, many synagogues have the custom of decorating their sanctuaries with flowers and greenery. But some rabbis were uncomfortable with this, fearing that it too closely resembled Christian traditions, which in turn led to the custom of using a papercut instead called a shavuosl.

2. Shavuot is Judaism’s only all-nighter

The main ritual associated with Shavuot is known as Tikkun Leil Shavuot. The custom originated among the mystics of Safed as compensation for the fact that, according to the Midrash, the ancient Israelites slept in on the day of the giving of the Torah. To make up for that ancient mistake and to show our eagerness to receive the Torah, the custom emerged of staying up all night to study. In many synagogues the study session is capped by a sunrise worship service at daybreak. 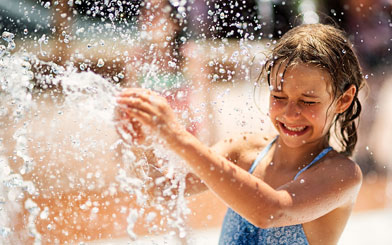 3. Israelis have water fights on Shavuot

In Israel (in a typical year) Shavuot is the holiday of water. In the center of many cities, massive crowds engage in water fights on the holiday, tossing water balloons at each other or spraying passersby with powerful water guns. Others embrace the water idea by taking hikes along rivers and streams. The origins of this tradition aren’t entirely clear, but some link it to North African Jewish communities that celebrated water on Shavuot because the Torah is sometimes compared to the life-giving properties of water. Also, it’s the start of the hot season, so frolicking outside with water only makes sense.

5. The figure most associated with the holiday wasn’t born Jewish

Traditionally the biblical Book of Ruth is read in synagogue on Shavuot. The book tells the story of Ruth, a Moabite woman who returns to Israel with her mother-in-law after the death of her husband. Though Ruth is encouraged to stay with her own people, Ruth refuses, speaking the lines for which she would become known: “For wherever you go, I will go; wherever you lodge, I will lodge; your people shall be my people, and your God my God.” Ruth’s embrace of Judaism took place around the time of Shavuot and her acceptance of the Jewish faith is seen as analogous to the Jewish acceptance of God’s Torah.

6. Shavuot is the only holiday where dairy foods are encouraged

Eating meat and fish are signs of celebration in Jewish tradition, which is why many people eat beef or chicken on Shabbat and other Jewish holidays. Shavuot is the one Jewish observance where the opposite is true — dairy foods like cheesecake and blintzes are customary. Various reasons for this tradition have been offered, but many link it to the fact that the kosher laws were handed down on Shavuot, and the ancient Israelites, finding that their meat was no longer kosher, ate dairy foods instead.

7. Shavuot is the only holiday with no fixed date

According to the Bible, Shavuot is observed seven weeks after “the sickle is first put to the standing grain.” In practice, the counting began on the second day of Passover. In ancient times, when the new month was established on the basis of witness reports, that meant that Shavuot could fall on either the fifth of sixth day of the Hebrew month of Sivan. Today, it is observed on the 6th day of Sivan. And because Shavuot begins only after seven weeks have been counted, the holiday does not traditionally begin until nightfall, unlike other Jewish holidays that begin at dusk.

Confirmation is a late arrival to Jewish tradition, introduced by the Reform movement about 200 years ago as a way for a Jewish teenager to “confirm” their adult commitment to Judaism. The connection to Shavuot, which marks the acceptance of the Torah on Mount Sinai, is a natural one, though some Reform communities today observe the rite on Shabbat instead.

Coming seven weeks after what is frequently considered the most widely observed Jewish ritual, the Passover seder, Shavuot is often overlooked by less observant Jews. Various reasons have been suggested for this. Perhaps the most compelling is that, unlike Passover (with its seder and dietary restrictions), Sukkot (with its custom of eating in a sukkah for seven days), or Rosh Hashanah (with its shofar blowing and traditions of introspection and forgiveness), Shavuot is comparatively lacking in any specific dramatic rituals. The primary act associated with Shauvot, the all-night study session, developed comparatively recently, most likely in medieval Spain.

Reprinted from MY JEWISH LEARNING