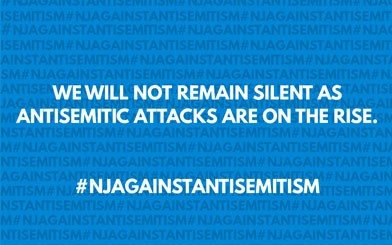 Jewish Federation in the Heart of NJ, along with Federation colleagues across the state, and partners at ADL and AJC launched New Jersey Against Antisemitism. This campaign showcases the diverse array of New Jersey’s political, faith, and communal leadership who have joined in declaring that antisemitism, like any kind of hate, is unacceptable in any form and must be condemned with no caveats or qualifiers.

Over 100 of New Jersey’s elected officials, faith leaders, and community partners have signed on to stand with the Jewish community in speaking out against antisemitism. More community leaders and individuals are invited to sign on as well.

This campaign demonstrates that there is a deep recognition among our interfaith/intergroup partners that hate against one is hate against all, and we must stand united to combat it.

A  press release was released on July 8, 2021, announcing the NJ Against Antisemitism campaign together with a social media campaign promoting this effort and encouraging others to join.

The Jewish community, and other vulnerable populations, have too frequently been the victims of assault, threats, vandalism, and other forms of intimidation. In recent weeks, there has been a significant uptick in antisemitic incidents in person and online, including Jews being beaten in New York and Los Angeles, and their religious institutions threatened and vandalized. This comes at a time when antisemitism, hate crimes, and ethnically- and racially-motivated extremism remain at historic highs.