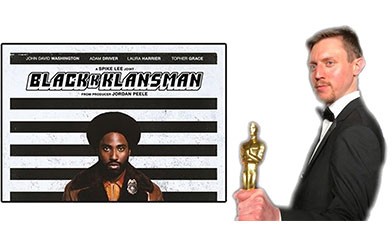 Jewish Federation in the Heart of NJ, in partnership with the Two River Theater & Indie Street Film Festival, presents a very special morning with Oscar-Winning Co-Writer of The BlackKkLansman, David Rabinowitz.

The film by visionary filmmaker Spike Lee, is based on the autobiographical book "Black Klansman," and is a true story following an African-American detective who infiltrates and exposes the Ku Klux Klan in 1970s Colorado. NJ Native, David Rabinowitz co-wrote the screen play that won an Academy Award for Best Writing Adapted Screen Play, among many other awards and nominations.

Rabinowitz will engage in a live pre-film discussion with audience members at Two River Theater in Red Bank, NJ starting at 10:30am followed by a screening of the BlacKkKsman at 11:30am.

“We are beyond thrilled to have David Rabinowitz as part of the Indie Street Film Festival this year and very grateful to the Jewish Federation for making it all possible! David’s personal success story and willingness to share his knowledge will make this event extremely inspiring for all in attendance, especially fellow New Jersey filmmakers," says Indie Street Film Festival Artistic Director, Jay Webb.

Recommended minimum donation for this discussion is $25. All donations to benefit Jewish Federation in the Heart of NJ and Two River Theater.

INDIE STREET INSTITUTE is a non-profit organization formed to create interactive art & film experiences that challenge people to connect with and be inspired by new ways of thinking. The organization’s flagship event, THE INDIE STREET FILM FESTIVAL, brings the most talented storytellers from across the globe to the screens of Red Bank, NJ.  Born from a cooperative of filmmakers, Indie Street Film Festival combines top-notch independent cinema with industry discussions, live art and music experiences, and social gatherings that look to spark important conversations within our diverse communities. For more details on festival events: indiestreetfilmfestival.org

TWO RIVER THEATER: Since its founding in 1994, Two River Theater has been committed to creating great American theater by developing and producing work by some of the country’s leading artists. We are proud to be viewed as a vital cultural resource in the community of Red Bank, New Jersey. Through 8+ theatrical productions each year (including world premieres, musicals, classics and theater for young audiences) and 40+ annual events happening around Monmouth County, we produce exceptional theater and cultivate engaged audiences. Two River Theater is under the leadership of Artistic Director John Dias and Managing Director Michael Hurst.  For more information visit tworivertheater.org.