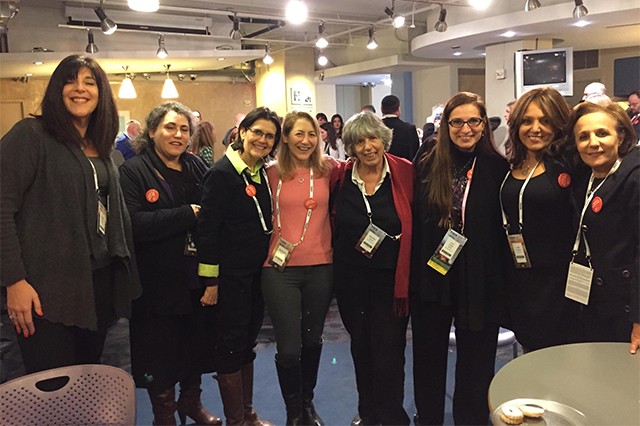 MARCH 2, 2015 – (WASHINGTON, D.C.) Last night the Jewish Federation in the Heart of New Jersey welcomed approximately 100 guests at a reception for Monmouth and Middlesex County residents attending the AIPAC Policy conference. “Ours was one of the very few Federations doing a reception at AIPAC,” said Keith Krivitzky, CEO. “It is a sign of partnership and the importance of the work AIPAC does in strengthening the relationship between government and political leaders and Israel.”

Eric Fingerhut, the President and International Director of Hillel welcomed attendees to the Schusterman International Center (Hillel's HQ), where the event was held. He spoke about the importance of Israel engagement and education work on campus, which has become in some places a battleground between Israel haters and pro-Israel Jewish and non-Jewish students - as well as a critical venue for engaging those who don't fall in either camp with Israel.

In a related, special briefing, an AIPAC representative spoke about the growth in participants and leadership among community members from the Monmouth and Middlesex-centered heart of New Jersey - and highlighted the leading role the Jewish Federation in the Heart of New Jersey is playing in building bridges and helping support AIPAC's work.

Mitch Frumkin, the Federation's President, spoke about how we all share similar goals, and if we work together we can accomplish a lot more than working separately. Mitch also spoke about the Federation's focus on engaging the 120,000 Jews in our area - not just with Federation, but with how Jewish life and community can be there for them, adding value and meaning and support.

Keith Krivitzky, CEO of the Federation, closed by highlighting the parallels between what is happening in the world and to the Jewish community today with the Purim story, the holiday we will be celebrating later this week, saying resurgent anti-Semitism requires collective action by the Jewish people to ensure survival of the Jewish people. (See recent article from NJJN).

Several community rabbis were in attendance, including Rabbi Lisa Malik of Temple Beth Ahm in Aberdeen (pictured above, third from right, with fellow delegates from the synagogue who attended the Federation reception), Rabbi Joshua Finkelstein of East Brunswick Jewish Center, Rabby Nesanayl Braun of Congregation Brothers of Israel in Long Branch, Rabbi Jay Weinstein of Young Israel of East Brunswick, and Rabbi Laibel Schapiro of Chabad of the Shore. Also in attendance were Andrew Getraer, Director of Rutgers Hillel with several Hillel students, as well as Susan Antman, Executive Vice President of the Federation.