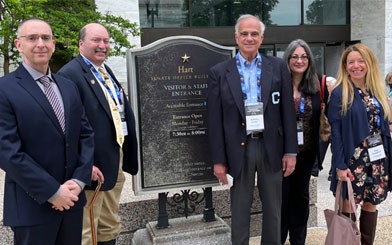 At a moment marked by unprecedented levels of antisemitism, leaders from Monmouth and Greater Middlesex counties joined with hundreds of other advocates around the country in Washington, DC for the Jewish Federations of North America’s Washington Conference to urge our nation’s leaders to combat antisemitism and hate crimes and increase funding for Jewish communal security. The group also advocated for expedited resettlement of Ukrainian refugees in their advocacy meetings with dozens of members of Congress and the Senate.
“Our delegation joined Jewish Federation members from 35 states, people of all backgrounds but united in our common struggle for justice, not just for our own but for all vulnerable populations in the United States,” said heart of NJ delegate Tony Kestler of Manalapan.
“The timing of the conference could not have been more relevant as antisemitic incidents are at record-highs in NJ and the U.S.,” said Dan Rozett, Jewish Federation in the Heart of NJ’s Manager Community Relations and Israel Engagement, who led the community’s delegation. “The conference is a keystone in Jewish Federation’s ongoing work with Jewish, multifaith, and government partners to seek practical solutions in matters of importance to the Jewish and broader communities.”
During the two-day conference, Members of Congress and other thought leaders and public officials addressed the participants.
“The opportunity to inform our political representatives of the necessity for their support allowed us to actuate our civic duty and help direct national policy in a positive manner,” said delegate Alan Brodman of Monroe.”
“I felt it was time for me to learn how I could make an impact,” delegate Amy Goodman of Morganville added.
Delegate Dara Winston of East Brunswick, who also works as a synagogue director, informed lawmakers of the importance nonprofit security grants for houses of worship and their extended communities.
Susan Antman, Jewish Federation in the Heart of NJ’s Executive Director thanks delegates for raising their voices in support of issues that enable Jewish communities to be healthy, safe, and caring.
Jewish Federation in the Heart of New Jersey supports and promotes individuals and organizations throughout Monmouth and Greater Middlesex advance efforts making Jewish life stronger, safer, more supportive, and sustainable — caring for people in need while investing in a strong and joyful Jewish future for generations to come.