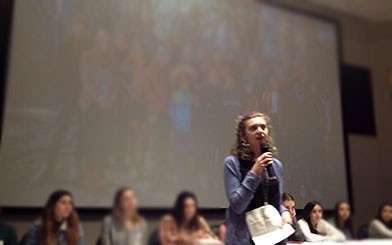 Meet Hannah, a high schooler who is on a mission. When Hannah first joined JTEAM, she was a quiet, serious student who didn’t know what to expect from the group of students she met or the activities that were a part of the program. But eventually she began to participate in the discussions and share her opinions on what was important to her and how she felt she could make a difference. Hannah and her team researched the needs in our community and advocated for different organizations that would help meet those needs.

At graduation, when checks were presented to these organizations from the teens’ “pot of funds,” Hannah said to her audience, “JTEAM is a group that really showed me how to maximize the gifts God gave us, how to give in the best way possible, and how to keep the Torah alive in all of our actions.”

But the end of Hannah’s year in JTEAM was not the end of Hannah’s activism, but merely the beginning. She had learned that she could make a difference, and nothing was going to stop her from trying to make the world a better place. She learned about, and joined Youth v Gov, an organization working to fight climate change through a lawsuit to convince the government to obtain a National Climate Recovery Plan. She was in contact with several leaders of national faith-based organizations, looking for support and help. She spoke at her school to encourage teens to support the program, and then passionately about the importance of fighting for climate change at J-SERVE 2019, a global day of Jewish teen service, where more than 150 teens listened to her, learned from her, and even became involved with her in her fight to make a difference.

Hannah found her voice and her ability to make a difference in JTEAM. You could, too.