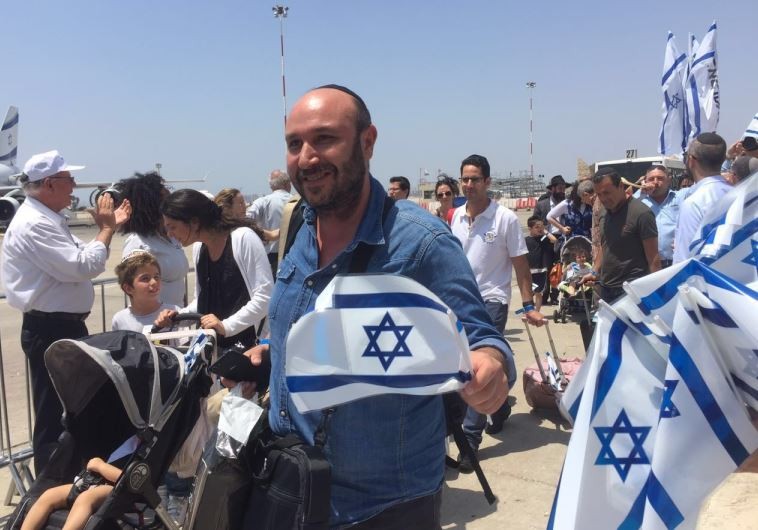 The largest French aliya fight so far this summer landed Wednesday at Ben-Gurion Airport, where the newcomers were greeted with calls of “bienvenue en Israel” at a festive reception in their honor.

Some 200 French Jews were aboard the flight, organized by the Jewish Agency for Israel in collaboration with the Immigration and Absorption Ministry and Keren Hayesod- UIA.

“I feel very happy,” one man exclaimed as he stepped off the bus that shuttled the olim from the airplane to the event hall. There they were greeted by Israeli singing and dancing, before listening to a host of welcome messages, including one from Prime Minister Benjamin Netanyahu, transmitted by video.

“When you walk here in the streets you will feel that you are in the Jewish homeland,” Netanyahu assured the new olim. “This is not just a big personal journey, it’s not just of personal importance, but also of national importance.”

Keren Hayesod-UIA chairman Eliezer Sandberg dedicated his greeting to a nine-year-old girl celebrating her birthday on her move to Israel. “Maybe in many years when I will be much older, we will meet, and you will be prime minister,” he said, adding, “In Israel there is no glass ceiling, this country belongs to us all and all dreams can become reality.”

Jewish Agency chairman Natan Sharansky, who was an active participant in the frequent interludes of dancing, told The Jerusalem Post that, despite the many welcoming ceremonies he has attended for new olim, the emotion never fades.

“Each aliya reminds me of my own aliya; each aliya is the closing of a huge circle,” said the Soviet-born former refusenik, who made his own aliya in 1986 after nine years of imprisonment.

“We all know there is a future for French Jews in Israel, while there is a discussion over whether they have a future in France,” he told the olim. “You all made a giant step today in building a more secure future for your children.”

Indeed, many of those fresh off the plane gave that as the reason for the move to Israel.

“We decided to come to Israel for the children,” Anthony Marek of Paris told the Post.

“I think it’s better here, because they will be able to have a better quality of life here, and we have family here. In France, life is good; but here we want to restart something. It’s a chance to begin something new and to give the children that chance that we didn’t have.”

His 14-year-old daughter, Alexia, is visibly emotional, with tears in her eyes. “I’m scared because I have to make new friends, and change everything. But I’m so happy that I have family in Israel.”

Yael Saal, who comes from a small town just outside Paris, is heading to the West Bank settlement of Brukhin. “It’s a big day for all the family,” she says, motioning to her five children. “I think the future is better for my children in Israel,” she says, “for security, for work and it’s easier to follow the religion here.”

“It’s good you’re home,” Immigration and Absorption Minister Sofa Landver told the crowd. “We are standing side by side with you and you will very quickly feel that you didn’t make an effort for nothing; you will feel that Israel is your home.”

Fred Guedj, who came with his wife and three children from Paris, already feels at home. “It’s like a dream come true to live here. I feel like a fish in the sea, I feel at home.”

Dozens of the event’s participants simply came to welcome the new olim to Israel.

Some are themselves olim, reunited with their families who followed in their footsteps, and other have come to greet their friends.

Elina Grinshteyn, 26, a Russian immigrant who has been in Israel for one year, came to meet a French friend from the flight.

“I came to support her. We met here in Israel at seminary. It’s very special for me to be here today and to see aliya growing. It’s very exciting to see my friends who I made here making the same choices to live in Israel.”

Grinshteyn was at the airport just two days earlier, greeting another friend from London, who joined her this time round to welcome their French friend.

“I think it’s very important to come. It’s so crucial for people making aliya to see a familiar face, to have someone to hug. It’s the scariest moment ever when you leave this airport with four suitcases, and you have your whole life in those four suitcases, and all you want is a little confirmation that you made the right choice.” 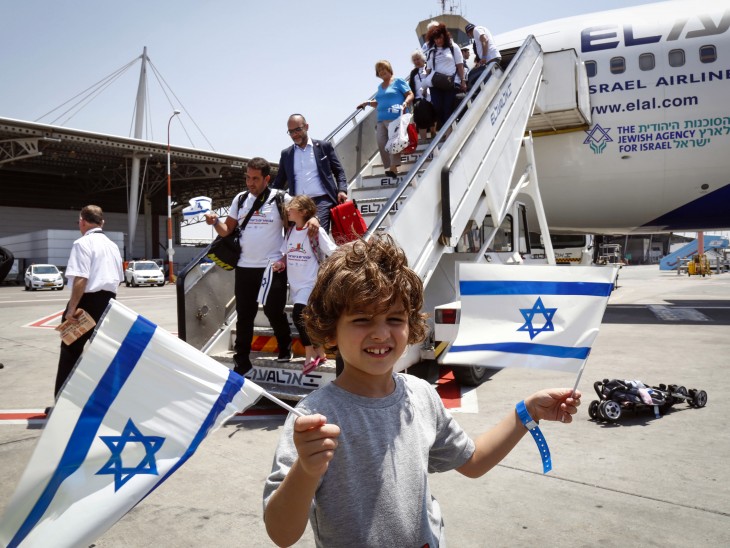