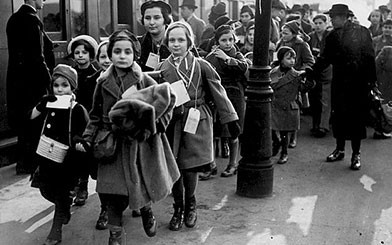 The Jewish Federation in the Heart of New Jersey is pleased to share the following news from the Claims Conference.
On December 18, 2018, Julius Berman, President of the Claims Conference, announced that as a result of ongoing negotiations between the Claims Conference and the German government, an agreement was reached on the 80th anniversary of the Kindertransport, to provide compensation payments for child survivors of the Kindertransport.
The Kindertransport Fund is now open and will begin processing eligible applications shortly. Although some survivors were provided a small payment in the 1950s, prior payments under compensation programs will not bar claimants from receiving this new benefit. The fund will issue one-time payments of €2,500, which is approximately $2,800 US.
This fund is open to Jewish Nazi Victims who met the following criteria at the time of transport:
Applications must be submitted by survivors, not heirs. However, if an eligible survivor passes away after an application form is received and registered by the Claims Conference, the surviving spouse is entitled to payment.  If there is no surviving spouse, the child(ren) of the eligible child survivor is entitled to the payment.
Application forms can be downloaded from the Claims Conference here. Alternatively, applicants can call Claim Conference call centers and they will be happy to mail them application forms. The phone number for people who reside in the United States is: +1-646-536-9100.
Both Jewish Family Services of Middlesex County and Jewish Family & Children’s Services of Monmouth County are available to assist applicants in downloading and/or filling out the application online, notarizing, and mailing it to the Claims Conference.
Contact information for both agencies:
Monmouth County:
Jewish Family & Children’s Services
Amy Dorfman, 732-774-6886
Middlesex County:
Jewish Family Services
Fay Ross, 732-777-1940
DOWNLOAD THE APPLICATION HERE
Frequently Asked Questions

Julius Berman, President of the Claims Conference, announced that as a result of ongoing negotiations between the Claims Conference and the German government, an agreement was reached on the 80th anniversary of the Kindertransport, to provide compensation payments for child survivors of the Kindertransport. “Our team has never given up hope that the moment would come when we could make this historic announcement,” said Berman.

The Kindertransport started in 1938 when British authorities agreed to allow an unspecified number of children under the age of 17 to enter the country from Germany and German-annexed areas (Austria and Czech lands) (Source USHMM). It became evident after Kristallnacht (the night of broken glass), that the situation for Jews in Germany was reaching crisis proportions. Jewish families began urgently searching for any avenue to get their children to safety. Over 10,000 children were saved from death when parents, who were desperate to save their children from the horrors of life under the Nazis, found refuge for them in England – often tragically relinquishing their babies and infants to the care of older children for the possibility of getting them to safety. In heartbreaking scenes on train platforms, these children were often torn from their parents’ arms and, in virtually every case, never saw them again.

Ambassador Stuart Eizenstat, Claims Conference Special Negotiator, said of this achievement, “This payment comes at a time when we are commemorating 80 years since these children took their fateful journey from Germany, Austria and Czechoslovakia to Great Britain. After having to endure a life forever severed from their parents and families, no one can ever profess to make them whole; they are receiving a small measure of justice.”

Greg Schneider, Claims Conference Executive Vice President said, “We must all take a moment to commemorate this recognition and sacrifice. No one can imagine the pain on train platforms as the Kindertransports began and the extraordinary steps these parents took to give the opportunity for life to their children – a life those children led without mothers, without fathers, and in many cases, without family of any kind.”