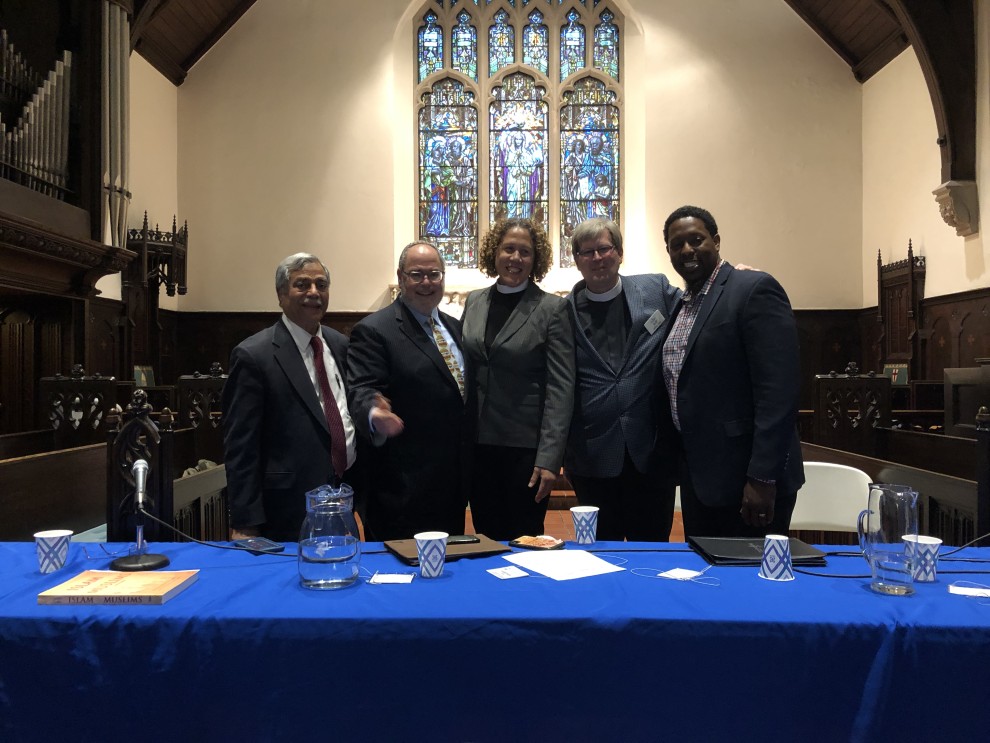 On Sunday, March 1, over 130 people said, “NO TO HATE!" at Seeing Human, a panel discussion among  Jewish, Christian, and Islamic clergy, reminding attendees these religions require us to see each other as "human," first. The program was facilitated by Jewish Federation in the Heart of NJ's Jewish Community Relations Council (JCRC), hosted St. George's-by-the-River Episcopal Church, Rumson, and supported by Hackensack Meridian Health.

“Our goal was to bring disparate people together to share in messages of love and respect from our respective traditions,” said Rabbi Marc Kline of Monmouth Reform Temple, Tinton Falls, and Federation's Chair of Interfaith Initiatives. “The synchronized heart-beat was palpable, and we left knowing how blessed we are to have each other.”

“Combating hatred is important for a number of reasons,” said Reverend Jeffrey Roy, Priest in Charge at St. George’s-by-the-River, and panel facilitator. “The Bible and Jesus both instruct it is what we should do. Secondly, I want my children to live in a world that is different than the one I grew up in, one where rather than being afraid of one another, we celebrate each other's differences. Finally, as a practical matter, it takes so much energy to hate. The personal cost of hating another person is very, very high. I would rather use that time and energy to focus on love and caring for the needs of others.”

Reverend Roy asked the panel to comment on ways to move beyond preaching to the choir about fighting hate, to reach beyond the usual audience?

“Sometimes it is necessary to preach to the choir, said Rev. Dr. Jeffery, because as aware as we think we are of those different from us, there are always those people we have trouble with. We always need to be paying attention.”

Other suggestions included building new relationships, visiting houses of worship that are different from one’s own, and asking questions to learn from and connect with others.
When an audience member asked how to confront individuals making racist remarks, Pastor Vanzant drew from a personal experience:

“I was driving home from the library in Princeton late at night with one of my peers, a young white woman. I was pulled over and berated by the police officer, who asked me why I was in Princeton and asked my colleague why she was in the car with me. It took everything in me to keep my cool because I knew I was being profiled for being a black man in Princeton, NJ. After he saw my license and student ID were valid, I asked him, ‘What would you think if the roles were reversed? If whites were the minority, should I treat you the way you treat me?' Without responding, the officer tapped my car door and said in a condescending tone, ‘drive safe, you hear.’”

“We should be asking questions that prompt people to think as though they are the other,” said Pastor Vanzant. Many times, people do what they do because they have never been challenged to think otherwise. Questions that put someone in the other person’s shoes can deescalate tension and root out the meanest of people’s actions and comments.”

One audience member from St. George’s-by-the-River Church said she was shocked to see two-armed security guards on the premises, which she said was a first. She went on to realize people of other religions sometimes feel threatened at their community gatherings.

As the program came to a close, panelists and audience members agreed it would take a unified front rooted in love and respect to stand up to racism, bigotry, and hate.

"We planned this and our forthcoming series of interfaith events to increase the decibels carrying messages of trust and engagement, to surpass those of fear-mongering, hate, and ignorance that too often pass for interpersonal communication and news,” said Rabbi Kline. “Jews, Christians, and Muslims came together in this cause. We look forward to expanding the dialogue to include non-Abrahamic religions in venues all around our communities."

“It was encouraging to see the audience engaged and willing to take the initiative to reach out to people of other faiths to learn more about them as human beings,” said Dr. Chaudry. “There is hope!”

Dr. Chaudry closed the event by asking the audience to take The Pledge to Stand Up for the Other, which he created in 2015 to encourage people to speak up against bigotry. He and Rabbi Kline took it to the Statehouse in Trenton, where both houses of the Legislature unanimously signed it. Since then, organizations all over the state affirm its words and signed the pledge. It reads:

“While interacting with members of my own faith, or ethnic, or gender community, or with others, if I hear hateful comments from anyone about members of any other community, I pledge to stand up for the other and speak up to challenge bigotry in any form.” www.standupfortheother.org

“Our time together was representative of the Reign of God, where people of all walks of life were in one place and one conversation of mutuality,” said Pastor Vanzant. The experience was rich and enriching.”

Upcoming events include two Iftar celebrations, which Jewish Federation is planning to sponsor during the month of Ramadan. The next “Seeing Human” panel takes place on June 2nd at the Diocese of Metuchen and plans are being made to include members of the Hindu, Buddhist, Jain, and Sikh communities.

“Jewish Federation in the Heart of New Jersey will continue to work with leaders of many faiths to confront anti-Semitism and all hate in our community,” said Joel Krinsky, board member, and JCRC board liaison. “We support one another in times of challenge and celebration, and together, we can work towards making the world a safer and better place.”

For more information on the JCRC, see jewishheartnj.org/jcrc