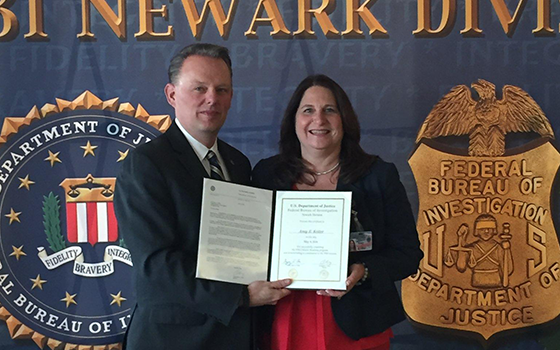 On May 8, Amy Keller completed The Federal Bureau of Investigation Citizens Academy, a seven-week program that enables business, religious, civic, and community leaders to develop stronger relationships with the FBI on behalf of their communities. According to its website, The FBI Citizen’s Academy is a part of the FBI's Community Outreach Program; its mission is to:

Keller was nominated for the program in recognition of both her professional contributions to the safety and security of the Jewish community in Monmouth and Greater Middlesex counties -- through her work with the Jewish Federation in the Heart of New Jersey’s Security Task Force, and her extensive personal service throughout the broader community – from environmental causes to public education. She was one of 30 selected from a field of 80 applicants. Candidates were nominated by FBI employees, former Citizens Academy graduates, and community leaders – and selected by the special agent in charge of community relations with the bureau’s Newark field office.

During the program, participants were introduced to the structure and operation of an FBI field office; the FBI's investigative programs; priorities and operations; and some of the investigative techniques used in criminal, counterterrorism, and counterintelligence investigations. They also participated in firearms training and simulated tactical scenarios.

“The FBI has been a long-time valued partner of the Jewish Federation through our Security Task Force and our interfaith initiatives combatting hate,” said Amy Keller. “Selecting me to participate in its Citizen’s Academy is a testament to the Federation’s close working relationship with the bureau. I look forward to helping the Jewish Federation bring even stronger relationships, insights, and tools gained from the Citizens Academy to the Jewish community and our interfaith partners.”

Keller said classroom work – which included active intruder case studies, human trafficking awareness, an overview of biological toxins, cybercrime, and fraud, for example – helped debunk myths portrayed in TV crime dramas. With all its robotics, crime labs, and canine officers among other impressive resources, Keller noted, the FBI at its heart are people caring for people.

“I came away knowing the FBI welcomes organizations and citizens having a direct line into its communication channels, resources, and services,” she added. “We have someone to talk to, someone to bounce ideas off of. And the FBI needs us – the community. They can only connect dots if the community reports things.”

“Amy will serve as an ambassador for the FBI, to foster a greater understanding of the role of Federal Law Enforcement in the community through frank discussion and education,” said FBI Special Agent in Charge Gregory W. Ehrie.  “Our Citizen Academy graduates are an invaluable asset to the mission of the FBI, which is to protect the American people and uphold the constitution of the United States.”

The Jewish Federation in the Heart of New Jersey strengthens the entire Jewish community – making it more caring, connected, and committed to addressing the issues it faces today and for the future. Central to its work are caring for the vulnerable; connecting people to communal resource; responding when crisis strikes; and cultivating a stronger sense of collective responsibility.