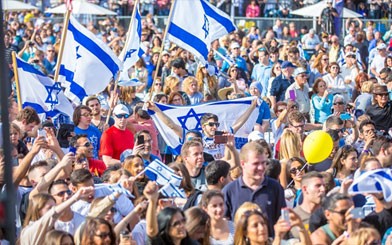 During Passover, Israeli flags begin to pop up on the streets of Israel, starting a three-week roller coaster ride for Israel’s national symbol. Climbing high to celebrate Chag Ha’Cherut, the Festival of Freedom, one of the four names of Passover, to a steep drop on Yom HaShoah, Holocaust Remembrance Day and Yom Hazikaron, Israeli Memorial Day, then climbing high once more to Yom Ha’atzmaut, Israeli Independence Day. 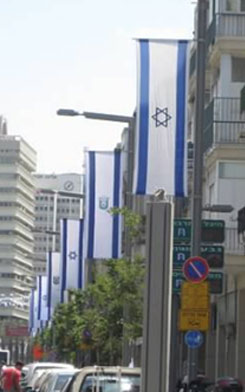 Flags decorate the streets of Israel

Wondering why Israeli flags begin to fly for Passover? The answer is simple. Passover marks, among many things, the “Exodus,” the liberation of the Jews from slavery in Egypt. Naturally, this is cause for celebration.

As Passover ends, the roller-coaster dives into a descent marking one of the most tragic and devastating events in Jewish history: the Shoah, the Holocaust. In Israel, Yom HaShoah is a national day of mourning. All places of entertainment close, somber music is played on the radio, and ceremonies are held in all government offices, schools and places of work. But how can Yom HaShoah be a national day of mourning if it took place before the State of Israel was established? As the homeland for the Jewish People, Israel commemorates the loss of six million of her people. 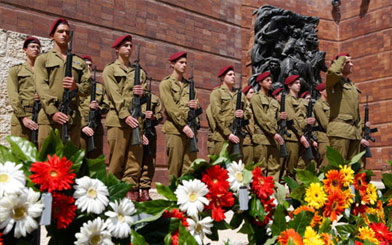 One week after Yom HaShoah, Israel together with Jews worldwide, mourn -- this time for warriors who fell in defense of the Jewish homeland. On Yom Hazikaron, Israeli Memorial Day, the country will come to a grinding halt to remember over 23,000 men and women of the Israel Defense Force (Jews, Druze, Christian and Muslims, alike) killed in Israel’s wars, together with over 4,000 civilians who were murdered in countless terror attacks. 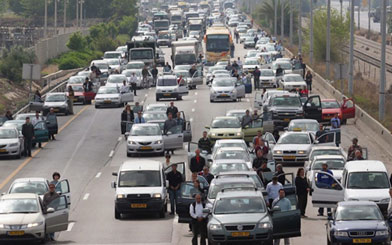 On Yom Hazikaron, in addition to all who lost their lives defending Israel, the country remembers a unique group of Jews who had no remaining family to mourn them when they died defending Israeli independence. Known as the Last Descendants, they are people who survived the horrors of the Holocaust, made their way to British Palestine in the years after, chose to fight for Israel, and lost their lives doing so. Read about two of these heroes HERE. 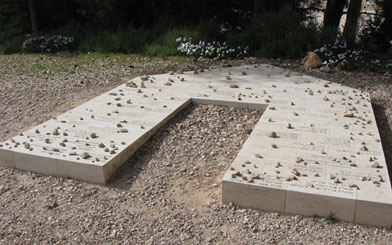 They, and all Holocaust survivors who fought for the State of Israel, represent the bridge from
the dark days of the Shoah to the light that became independence.

As for the flags that went up during Passover, they never came down. Remaining in place for the entire three weeks, they decorated the country even while in mourning, symbolizing survival, self-determination and a promise that such horrors will never happen again. When Yom Ha’ atzmaut, Israeli Independence Day, arrives, the flags wave for Israeli independence today and for all time. 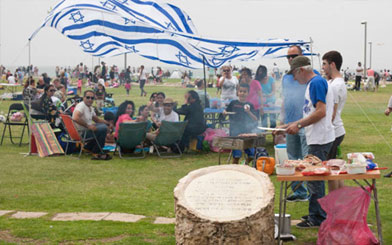 Join us Wed., May 8, for "One Community, One People" - a community-wide Yom Hazikaron and Yom Ha’atzmaut event. From commemoration to celebration, we will honor the sacrifices of Israeli soldiers and civilians made in defense of the Jewish homeland, then after sundown, we'll transition into celebration of Israel Independence Day.  REGISTER