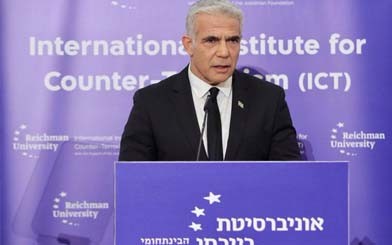 On September 12, Israeli Foreign Minister Yair Lapid laid out his detailed plan to defeat Hamas in the Gaza Strip through economic and diplomatic means in an address to the International Institute for Counter-Terrorism (annual) Conference at Reichman University. Read the official press release from the Israel Ministry of Foreign Affairs, including the full speech:

Economy for Security – In his speech, FM Lapid outlines the two-stage plan formulated by the Ministry of Foreign Affairs. The first stage in the short and medium terms and the second stage in the long term.

(Communicated by the MFA Spokesperson)

The State of Israel needs to answer a question for itself – what do we want to do about Gaza? Since Israel left the Gaza Strip in 2005, we have been dragged into round after round of violence causing suffering for our people and harming our economy.

The policy Israel has pursued up until now hasn't substantially changed the situation. The closures haven’t stopped the smuggling and production of weapons. Last night we once again struck Gaza after, yet another rocket was fired, and residents ran to their shelters. We need to change direction.

What should we do? The short answer is that we need to start a large, multi-year process of economy for security. It's the more realistic version of what in the past was called rehabilitation for demilitarization.

The purpose of the process is to create stability on both sides of the border. Civil, security, economic and diplomatic. The international community and the people of Gaza need to know that Hamas terrorism is what's standing between them and a normal life.

In addition – this process will allow Israel to focus its resources and attention on the real struggle – against Iran's nuclear program and the Iranian attempt to become a regional power by spreading terror and violence.

Surprisingly, a serious proposal of "economy for security" in Gaza has never before been put on the table. Definitely not officially and as part of a comprehensive view of the Palestinian issue.

There will be experts who tell you that this plan has no chance. The answer is – we never tried. For too long the only two options on the table have been conquering Gaza or never-ending rounds of violence.

Those are two bad options. Conquering Gaza goes against our national interest. There is nothing for us there. Rounds of violence wear down the IDF, our international legitimacy, and the solidarity and resilience of Israeli society.

That's not a reality we can accept. The obligation of the Israeli government is to come to our citizens and show them that we have left no stone unturned in seeking a solution for the question of Gaza.

I'll say it clearly – this isn't a proposal to negotiate with Hamas. Israel doesn't speak to terror organizations who want to destroy us.

From Israel's perspective – the representative body of the Palestinians isn't Hamas, but the Palestinian Authority. Israel won't hand out prizes to radical terror organizations and weaken the authority that works opposite us in an organized manner.

Advancing a formula of economy for security will force Hamas to explain to the resident of Gaza why they live in conditions of poverty, scarcity, violence, and high unemployment, without hope.

We need to tell Gazans at every opportunity – Hamas is leading you to ruin. No-one will come and invest real money, and no-one will try to build an economy in a place from which Hamas fires and which Israel strikes on a regular basis.

It's time to put the pressure on Hamas. It's time to cause the residents of Gaza to pressure Hamas because they understand what they are missing out on as a result of terrorism and understand how much they stand to gain if that terrorism stops.

Today, there is the absurd situation in which an antisemitic, Islamic terror organization attacks Israeli civilians and the world blames Israel. There will always be those who hate Israel and will blame us for everything, but a positive proposal will improve the situation.

It is obviously a long process. It won't be measured in months but in years. The burden of proof is on the other side. If the people of Gaza yearn for life, they will need to demand that Hamas maintain quiet while there is a process of rebuilding and rehabilitation.

Let there be no mistake, Israel isn't asking anyone to ensure our security. Only Israel provides security for Israel. Only we are responsible for the residents of the south. But because of that, it's time to initiate something with Gaza.

The power of the IDF allows to freedom of action in Gaza but that power also offers us freedom of diplomatic action. Our position of strength allows us to initiate instead of sitting and waiting for the next round.

And of course, Israel won't give up for even one second on the efforts to bring back our missing soldiers and civilians. Bringing back our boys must be part of any plan.

The initial plan we have developed at the Ministry of Foreign Affairs is in two stages.

The electricity system will be repaired, gas will be connected, a water desalination plan will be built, significant improvements to the health care system and a rebuilding of housing and transport infrastructure will take place. In exchange, Hamas will commit to long term quiet.

The international community will use its influence over Hamas to assist in the efforts to stop Hamas arming itself. It will work to strengthen efforts to prevent smuggling and an economic oversight mechanism will be put into place to prevent resources going to Hamas.

Without these oversight mechanisms, Israel and the international community won't agree to invest the necessary funds in Gaza. No-one in the world has any interest in investing in infrastructure in a place where another round of violence could break out at any moment.

Israel won't agree to improve the conditions on the very ground from where its citizens are threatened, especially if it strengthens Hamas instead of exacting a price from it.

That's why the rehabilitation process will be defined by a series of preset benchmarks, with each one given a specific timeframe. Any breach by Hamas will stop the process or set it back.

Our number one responsibility as a government is the security of the citizens of Israel. We are determined to act with force against any terror attacks, large or small, that emanate from Gaza, and we will exact a high price from anyone who initiates those attacks.

The security formula during the first stage is simple and Prime Minister Bennett has already outlined it: In exchange for quiet, we are willing to give more than before. If the quiet is breached, Hamas and the other terror organizations need to know that the response will be harsher than before.

If the terror is stopped during the first stage, Israel will maintain control over the supply of electricity and water to Gaza. Only in exchange for long term quiet will we be able to allow full energy independence for the Gaza Strip.

The Palestinian Authority will be part of the process. It will go back to being the authority responsible for the crossings. We will examine the option of re-opening the Karni Crossing. Egypt will maintain control over the Rafah Crossing.

It's worth emphasizing the critical importance of Egypt in this whole process. It won't happen without the support and involvement of our Egyptian partners and without their ability to talk to everyone involved.

If the first stage is classified as a success, we can move to the second stage during which the Palestinian Authority will become a central operating and supervising body, and which will be enshrined through a UN Security Council resolution.

A full economy for security plan will be laid out which will show what the future of Gaza can look like if Hamas accepts the Quartet Principles. Under those conditions the Gazan economy will change entirely, life in Gaza will look fundamentally different.

The residents of Gaza and the international community will get a practical and overarching plan to show what life in Gaza will look like if and when the military build-up stops, quiet is restored, and the economy for security framework is put into practice.

As part of the second stage the artificial island project off the coast of Gaza will be advanced and that will allow for the construction of a port. A transportation link between the Gaza Strip and the West Bank will be built.

International investment inside the Gaza Strip and joint economic projects with Israel, Egypt and the Palestinian Authority will be advanced. Industrial and employment zones will be built near the Erez Crossing.

These investments will be managed by the Donor Countries including the EU and United States, as well as the IMF and World Bank. They will be joined by the Gulf States, led by the United Arab Emirates.

As part of the second stage the Palestinian Authority will become the central body working to advance these different projects, it will be given the economic and civil management of the Gaza Strip.

The solution presented here doesn't address the two-state solution but my opinion on the matter is well known: Israel needs to act to strengthen the Palestinian Authority and to negotiate with it with an aim of achieving a two-state solution.

The political conditions – in Israel and in the Palestinian Authority – don't allow for diplomatic progress at the moment but in Gaza we can, and we should, act now.

In a wider context, the kickstarting of a wider process in Gaza will create better conditions for future negotiations if and when the situation allows for it. We have seen in the past that rounds of fighting in Gaza hurt the chances of returning to the negotiating table.

The solution I'm offering here today isn't perfect. It's important for me to present a different vision before any further escalation but in any case, there are no perfect solutions. It's time to let go of the zero-sum mentality in our approach to the Palestinians.

I don't see a down-side in such an offer as long as we are serious. If the leadership of Hamas in Gaza maintains quiet, the reality in Gaza will change dramatically.

If Sinwar and Haniyeh continue to act against Israel, we will know and the international community will know, and mostly the people of Gaza will know, that Hamas refuses to improve life in Gaza because the only thing they care about is killing Jews.

A process like this will strengthen our legitimacy dramatically. With all due respect to the romanticism of “a people who dwells alone”, we live in a connected world. The strength of our international relations is a crucial part of our national strength.

The Palestinians need to decide if they too want to become part of a forward-looking global network. In Gaza and the West Bank there is an opportunity for the Palestinians to join the stability, prosperity, and coexistence that the normalization accords are bringing to the Middle East.

The people of Gaza need to decide if they want to dramatically improve their quality of life, or if they want to be part of the chaos, extremism, and violence of radical Islam.

In conclusion – the things said here today aren't being said in a vacuum. Prime Minister Bennett and Defense Minister Gantz know this position and support the principle which stands behind it.

I've held a series of conversations with partners in the Arab world and western world who are looking at this proposal. With leaders in Egypt and the Gulf, with Secretary of State Blinken, Russian Foreign Minister Lavrov and with the European Union.

There is still work to do, we're still on the drawing board, but if this plan has a chance to succeed and gains widespread support, I'll propose it to the government as the official position and we will get to work.