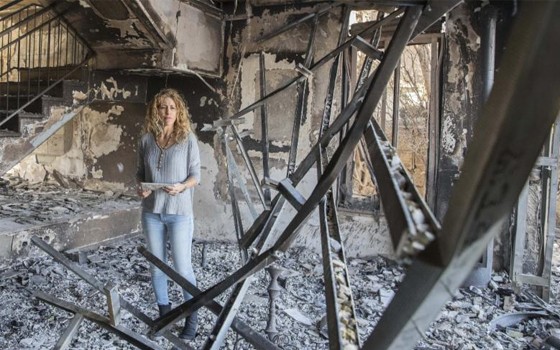 Israel is assessing the damage from five days of unprecedented wildfires. The following excerpts are from an update this morning by Jewish Federations of North America, with cautious optimism that the fires are over.

The Jewish Federation in the Heart of New Jersey supports our extended family in Israel, thousands of whom are now displaced. Our partners in Israel are already mobilized on behalf of those who are most vulnerable. They need our help now. As someone who's shown your strong support for Israel in the past, please help us help those in Israel once again.

The (Final) Toll
Close to 2,500 firefighters fought an unprecedented 480 blazes in five days. Remarkably, there were no fatalities. 180 people received medical treatment.

Thousands of homes are temporarily uninhabitable, with 700 entirely destroyed or with structural damage making them uninhabitable for the foreseeable future. In Haifa, alone, Israel's third largest city where the worst fires took place, some 60,000 residents were evacuated, a full quarter of the city's population. More than 1,600 Haifa residents were made homeless.

32,000 acres of natural forest land burned, about 30 percent more than during the 2010 Carmel Forest Fire.

Fourteen Israeli firefighting planes were joined by fifteen planes from other countries, including the Supertanker, which was leased by the Israeli government from an American company.
Israel has sent special thanks to the countries that contributed planes and personnel: Cyprus, Turkey, Russia, Italy, Spain, Jordan, Egypt, the Palestinian Authority, Greece and Croatia.

According to Israeli authorities, the initial fires were likely caused by extreme weather conditions of strong winds and an extended period without rain. However, police and fire investigators have gathered extensive evidence suggesting that many of the later - and largest - fires were deliberately set.

Some 35 people have so far been arrested for arson and incitement to arson, and police have said evidence indicates that the perpetrators were motivated by Palestinian nationalism.

Government Response
Senior members of the government have promised fast and effective service to assist those who have lost their houses. Yesterday, Prime Minister Benjamin Netanyahu directly addressed victims, stating, "All government ministries are committed to extending a hand to you quickly, to shorten the bureaucracy, and I say to brutally shorten the bureaucracy, to bring you assistance, relief and rebuilding as soon as possible."

Partners
A number of partners supported by the Jewish Federation in the Heart of New Jersey have announced support for those hit hardest in this crisis.

PLEASE HELP US HELP OUR PARTNERS

The Jewish Agency for Israel
The Jewish Agency has announced that it will provide cash grants of $1000 to the 700 families whose home was entirely destroyed or cannot be lived in for the foreseeable future and care for 22 elderly Holocaust survivors who were evacuated from their nursing facilities. Funding will be provided by contributions from Jewish Federations one other international philanthropy.

The American Jewish Joint Distribution Committee (JDC)
The American Jewish Joint Distribution Committee (JDC) has s focusing on Israel's most vulnerable residents - the elderly, people with disabilities, and families at risk, who typically need more than the standard provisions from the government. JDC is looking to provide targeted support to enable residents to recover from the damages caused by the fires - both physical and emotional - and adjust to their new reality quickly. In addition, JDC has activated its "Center for Independent Living Online" for people with disabilities to receive real-time support 24/7 from professionals who can help.

The Israel Trauma Coalition (ITC)
The Israel Trauma Coalition (ITC) is conducting a mapping of trauma needs with smaller municipalities that have been hit by the blazes. Last week, ITC was called in to provide trauma relief at the Carmel Hospital, evacuation centers, and to provide backup to existing welfare teams in Haifa. The municipality in Haifa has requested further assistance from ITC in providing direct care to some 1800 individuals in the city, 20 emergency welfare teams, and 8 institutions that were evacuated. Similar requests for assistance have come in from Zichron Ya'akov and Halamish.

Thank you for your support,
Mitch Frumkin,
President