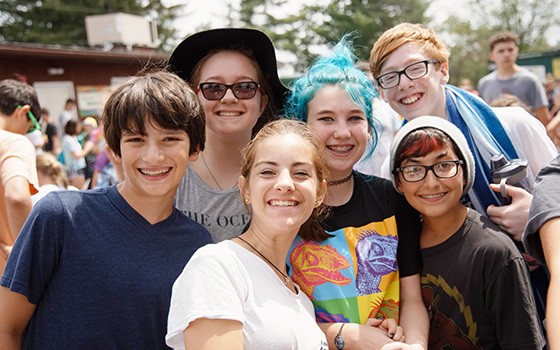 APPLICATIONS NOW BEING TAKEN FOR CAMP INCENTIVE GRANTS UP TO $1000

The Jewish Federation in the Heart of New Jersey (the Federation) is pleased to announce applications are now being accepted for ‘One Happy Camper’ incentive grants up to $1000 – for children to attend nonprofit Jewish overnight camp for the first time. Applications are evaluated and grants awarded on a first-come, first-served basis. The Federation is looking to extend up to 60 need-blind incentive grants for summer, 2018.

One Happy Camper grant recipients, like all campers, immerse themselves in the fun and traditions of camp while learning high-level social and life skills -- such as teamwork, problem-solving, leadership, and initiative. As one local mother reported in a thank you note to the Jewish Federation, “I’d expected to get back the same kid I sent off to camp. This kid was different. She was self-assured and happy to be part of a Jewish community.”

Investing in Jewish camp has become a priority for the Federation, Safran added. “Young people who participate in the joyful and immersive experience of Jewish camp tend to remain connected to Jewish life and leadership roles as adults,” she explained. Research shows that Jewish camp is one of the most effective ways to engage children and teens in the Jewish community and strengthen their Jewish identity. In each of the past two years, the Federation has given out three times the number of grants given in each of the previous five years.

Since 2006, FJC has partnered with over 100 North American federations, foundations, camp movements, and camps, as well as the Jim Joseph Foundation (JWest), and the Harold Grinspoon Foundation (PJ Goes to Camp) to provide over 70,000 grants totaling almost $70,000,000.

“The Jewish summer camp experience affects children in countless ways and opens their hearts to the joy of being Jewish,” says FJC CEO, Jeremy J. Fingerman. “We are passionate about making that experience possible for every Jewish child and deeply grateful to all of our partners who share our commitment to that goal.”

In addition to One Happy Camper grants, the Jewish Federation in the Heart of New Jersey offers need-based grants and grants for special needs camp options. “We hope every family with a child who wants to experience Jewish overnight camp will reach out to the Federation and ask about grant opportunities.”

More information about grants for Jewish summer camp being offered through the Jewish Federation in the Heart of New Jersey can be found at here.

The Foundation for Jewish Camp (FJC) builds a strong Jewish future through transformative Jewish summers. FJC BUILDS LEADERS, helping camp professionals and other camp talent develop the skills to lead their camps to exceptional outcomes operationally and educationally. They AMPLIFY JEWISHNESS, developing and supporting programs that deepen campers’ and counselors’ connection to their Jewish roots and culture. And they EXPAND THE FIELD, continuously expanding the number and variety of summer experiences to attract more—and more diverse—participants.