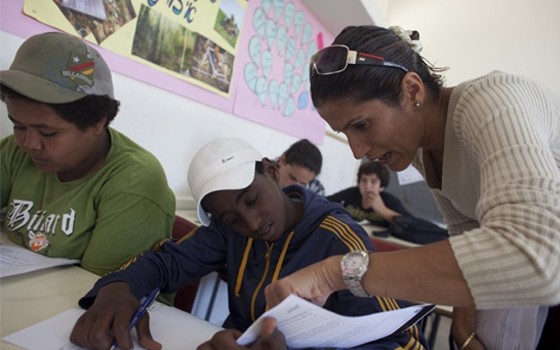 The Jewish Federation in the Heart of New Jersey proudly invests hundreds of thousands of dollars overseas, in Israel and in Jewish Communities throughout Europe. There are so many around the world who rely on organizations we fund for food, social services, guidance, and physical and mental rehabilitation.

Our Overseas Allocations Committee has recently completed the allocations process for funding social action organizations in Israel. The Committee chose 19 high-IMPACT programs run by 19 separate organizations, that address the needs of marginalized groups within Israeli society such as the immigrant population, at risk youth, those with special needs and Israelis who lack basic education, vocational training, and skill sets making it possible to enter the workforce and secure long-term employment as well as basic needs of society.

One example of a Federation funded program is the “SPACE Scholastic Assistance Program” run by Ethiopian National Project (ENP). This organization was founded with the purpose of advancing the integration of Ethiopian-Israelis into Israeli society. The National Federation Movement has embarked on a campaign to raise $18M over the next four years for the Ethiopian National Project’s (ENP) SPACE Program. The money we raise will be matched by the Government of Israel to meet a total $36M need for 8,729 eligible children.

The SPACE program is a holistic program that provides afterschool supplementary hours in small groups to strengthen students' academic achievements. Alongside the academic achievement components, the program addresses social needs and personal development; including self-esteem and leadership skills, while devoting attention to the social difficulties impinging on their progress in school. Ethiopian Israeli professionals serve as counselors who help strengthen the connection between the students and their heritage and integrate their culture into their daily lives. The program includes a lunchtime meal that for some is as critical as the scholastic assistance they are provided.

Funds provided by the Jewish Federation in the Heart of NJ will support the SPACE program in Tirat HaCarmel that currently reaches 100 7th-12th grade students, including 17 non-Ethiopian Israeli students.

Aviv, 18, a student at the Ariel school struggled considerably to learn English, and he was placed in a special education class in high school. Yet Aviv’s dedicated teachers in ENP’s SPACE Program worked tirelessly with him, helping him to learn English word-by-word. Because of SPACE, Aviv made the difficult decision to remain in high school for an extra year to finish his matriculation, and today he has earned a full matriculation certificate. Aviv even names English as his favorite subject in school, and he says that his dream is to become skilled enough that he will one day be able to write his own songs in English.

Another example is Hiwot, a single mother with one son who was 12 years old named Berhanu. All throughout his schooling, Berhanu had been frustrated that his mother was not more supportive of or interested in his education, but the explanation for that went deeper because Hiwot was illiterate. Her understanding of her son’s homework or class load was limited, but Berhanu’s frustration grew all the more. Berhanu had been attending ENP’s Youth Outreach Center in Tirat Hacarmel for a few months, when he saw advertisements for parent workshops. He told his mom about it, and because she could sense that it would mean a lot to Berhanu if she went, she did. Parents workshops are very helpful tools for Ethiopian-Israeli parents to learn and get great advice about how best to integrate into new Israeli society, and how to help their children all along the way. At the workshop, Hiwot learned of the importance of asking questions about her son’s schooling and to ask if he had completed his homework. The very next day when Berhanu came home from school, Hiwot surprised him by engaging in what he had done that day, and Berhanu was incredibly grateful to the ENP for the encouraging support and advice that it had given him, and now his mother as well.

As you can see gifts provided by generous donors from our community enable us to fund such programs as mentioned above, TRULY MAKING A DIFFERENCE IN THE LIVES OF SO MANY.

ENABLE US TO CONTINUE ON WITH OUR WORK. GIVE TODAY!

Thank you for your continued support and generosity,

Overseas Allocation Committee
The Jewish Federation in the Heart of New Jersey.