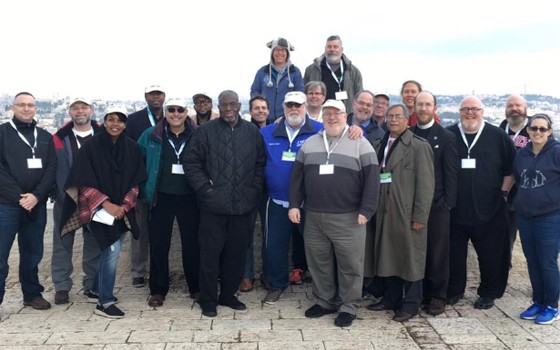 It has been about a week since my return from Israel, staffing the Jewish Federation in the Heart of New Jersey’s Interfaith Clergy mission with religious leaders from the Jewish, Christian, and Muslim communities. The trip was intended to show Israel, as is -- the good and the bad, and to show that the Israeli-Palestinian situation is complicated. Equally important was developing relationships between local faith leaders, using our common religious histories as the foundation for mutual cooperation. We were all reminded we have many more similarities than differences.

We arrived on a Wednesday morning at 6 a.m., and two hours later we were already at the Haas Promenade overlooking the Old City of Jerusalem. For the next five days we explored how the three Abrahamic faiths co-exist together in the city, hearing from religious leaders of each faith and visiting sites important to all, including the Kotel, the Church of the Holy Sepulchre, and the Dome of the Rock. Excursions were made to the Gush Etzion Settlement Block, where the group heard from Israelis and Palestinians on the challenges of creating a harmonious, peaceful reality for future generations. The remaining days in Jerusalem included visits to Yad Vashem, the Machane Yehudah shuk and tours of the Christian and Jewish Quarters.

The final three days in Israel were dedicated to understanding the external and internal challenges Israel faces. We visited the developing Palestinian city of Rawabi, where, according to local developers, young Palestinians will be able to purchase affordable homes, have abundant employment opportunities, and have resources to build a vibrant future. We also heard about the obstacles the Palestinians face whether it be power struggles and corruption within the Palestinian Authority as well as political roadblocks originating from the Israeli government. Next, while visiting the Golan Heights, the group saw first-hand how hostile groups from Syria inch closer and closer to Israel’s borders, while the civil war rages on. We also spoke about efforts made by the IDF to assist wounded Syrian refugees crossing into Israel, and how these acts of kindness are changing the way Syrians think about Israelis.

On our way to Tel Aviv from the North we visited an art gallery in the Israeli Arab town of Umm el Fahem where, besides presenting high quality art, Jews and Muslims discuss a wide range of current topics to encourage multicultural dialogue. While visiting Tel Aviv, the group saw products of the “Start-Up Nation,” and experienced the secular and modern “City that Never Sleeps.”

I can say with confidence we learned about each other’s faiths, found common ground through our beliefs, and began to build bridges to each other’s communities. It became clear to all in the group that Israel, while far from perfect, is a democratic, tolerant society where people of all faiths can thrive.

For me this was a professional milestone, bringing non-Jews to Israel and showing them the country that I love. Having lived in Israel for 20 years after growing up in Highland Park, I was able to add a personal touch to this trip. I conveyed to the group, as a Jew and an Israeli, I believe my people have a claim to this land that goes back thousands of years and that Jerusalem IS the eternal capital of the Jewish State. However, I made it clear that I, as most Israelis, recognize Palestinians deserve to be self-governed and, for peace, we are willing to compromise again. I shared concerns for my children, hoping they will not need to be in harm’s way, as I was during my IDF service, defending the country from enemies that wish to destroy us.

I spoke about Israelis wanting to live in peace with their Palestinian and other Arab neighbors. My tripmates saw for themselves that Israel is a free country driven equally by ancient values of justice and modern visions of innovation. They saw, contrary to some reports in the mainstream, Israel is striving for peaceful coexistence including equal opportunity for people of every ethnicity.

I shared my experience that Israelis are very critical of their government and constantly hold politicians accountable for their actions and policies, especially when dealing with issues related to the Palestinians and the Arab world. Peace and prosperity for all is a priority for Israelis and I felt it was my place to make that clear.

The foundation is now laid for further dialogue on Israel. I will work with my new friends to arrange information sessions for the Christian and Muslim communities and open more channels of communication, so that when one of us needs help, we will be there for each other – whether it be to combat anti-Semitism, Islamophobia, or any other form of bigotry, or to provide assistance to members of our joint community. We bonded as the decedents of Abraham while in the Holy Land and we will continue to be there for one another, as family.