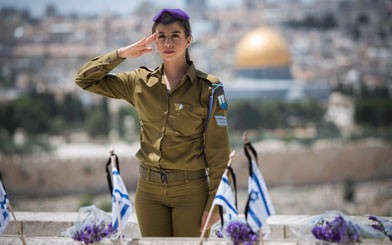 On Yom HaZikaron, which begins Monday night, April 27, we honor and remember those who died defending the Jewish homeland when called to military action and those whose lives were cut short by terror attacks while simply going about their daily routine.

With heavy hearts, we recall more than 23,000 soldiers and 4,000 civilians who died, and their thousands of friends and family members who lost loved ones.

We owe an immeasurable debt to those who have shouldered the brunt of these losses because we know we can never again be without a Jewish homeland. Just last week, on Yom HaShoah, we remembered the six million Jews who perished during the Holocaust.

Today, among Israel’s thousands we remember are those who survived the horrors of the Holocaust, made their way to Eretz Yisrael as the only remaining members of their families, and fought in 1948’s War of Independence. When that war ended, 144 of them were among Israel’s dead.

As their families had been wiped out by the Nazis, these Last Descendants, as they are known, had no family to bury them. Today, WE are their family. We honor them. May their memory be blessed.

And while 1948 may seem far, far away, we equally remember those lost more recently -- people like Rabbi Nechemia Lavi, a dear friend of our colleague, Dan Rozett, an East Brunswick native who lived in Israel for 20 years and served in the IDF for more than 14.

On February 25, 1996, Jerusalem’s #18 bus was filled with people on their way to work. A suicide bomber boarded and blew himself up, killing 26 people.

Exactly one week later, at that hour on that bus and route, another suicide bomber did the same, this time killing 19.

The next week, in a show of strength and support for the bus driver and passengers, 22-year-old Nechemia, carrying a large Israeli flag, got on that same #18 and rode the bus its entire route.

Fast-forward to 2015, now RABBI Nechemia was at home with his family, when they heard screams from the street. He ran out to help.

A terrorist, who had just murdered a young man and wounded the man’s wife, killed Nechemia as Nechemia  tended to the wife’s wounds. Those who knew Nechemia was always ready and willing to help others were not surprised by his actions.

We mourn Nechemia and cleave to all he teaches us: We are one people, one nation, with one destiny. This day is not just for Israelis, but all Jews.

The fallen are ALL our sons and daughters, brothers and sisters, mothers and fathers, teachers and confidents. They sacrificed their lives for all of us and our future.

In less than 24 hours, Yom HaZikaron will end and Yom Ha’atzmaut will begin – the celebration of Israel’s Independence. In an instant, we are called on to change our mindset from heart-rending pain to complete joy. It seems nearly absurd, but we must!

Some of you reading this have fought and bled for Israel. Many of us have lost family and friends to the fight. We would do anything to get them back. But they will forever be 18, 19, and 20 in our hearts.

Let us hold their memory, hold those they left behind, all of Israel, and each other in our loving care and our commitment to Am Yisrsael Chai – the nation of Israel lives.