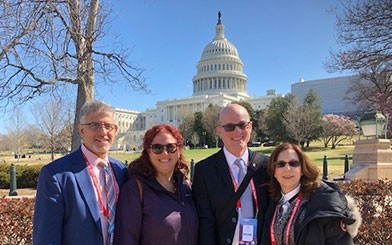 The heart of New Jersey’s Monmouth and Greater Middlesex counties were well represented on March 24, at the 2019 AIPAC Policy Conference, the largest gathering of America's pro-Israel community. Jewish community and Jewish Federation in the Heart of NJ leaders and supporters were among those who attended, including, but not limited to Rhonda Eiger, Michelle and Jay Fields, Wendy Friedman, Mary and Carl Gross, Gail and Marc Harrison, Laurie Landy, Rabbi Eliot Malomet, Allison and David Nagelberg with daughter Haley, currently a senior in college who will make Aliyah and join the IDF in August, Brenda and Roy Tanzman, Tamar Tolchin, and Barbara and Maurice Zagha. Photo above: Left to right:  Maurice and Barbara Zagha and Jay and Michelle Fields
AIPAC calls the conference a celebration of the U.S.-Israel partnership and the premier opportunity for every attendee to lobby their Congressional office to advance this relationship.
“AIPAC is the single most effective organization advocating for bipartisan Federal legislation promoting the security of Israel and the strength of the U.S.-Israel relationship,” said Allison Nagelberg. “Regardless of which political party is in power in America or in Israel, we come together over 18,000 strong - people of every age, faith and ethnicity. We learn about Israel’s miraculous history and groundbreaking accomplishments; we meet face-to-face with our representatives in Congress; and we leave exhilarated, inspired and filled with immense pride.” 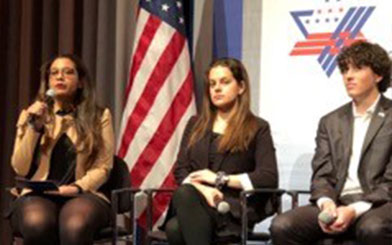 Hayley Nagelberg (center) on a college panel discussing the Pro Israel AIPAC community on her campus.
“AIPAC makes me feel proud, inspired, empowered, engaged and energized to be an advocate, an informant, and cheerleader of the U.S. and Israeli bond,” said Laurie Landy. “Our shared values and goals make the world safer and smarter!” 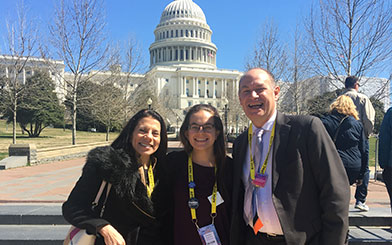 Left to right: Allison, Hayley and David Nagelberg on Capitol Hill
Maurice Zagha, who attended the conference for the first time, said he was “completely blown away by the conference experience; coupled with my recent trip to Israel (with Jewish Federation), this was a 1-2 punch. I was moved to tears by the outreach and bridge-building that such a small country like Israel takes part in. I was amazed by how prolific in so many areas –  tech, health, science and sociologically – Israel is a beacon of light to the world. I have already signed up for next year.”
At a time when anti-Semitism is on the rise, much of it in the form of hate and prejudice against Israel, AIPAC is a place where Jews of all denominations can stand together in support of Israel, regardless of political affiliation. The conference is “life-changing” said Wendy Friedman, “and now more than ever we need to stand together. I joined 18,000 of my friends in urging members of Congress to support a strong and vibrant U.S.-Israel relationship.” 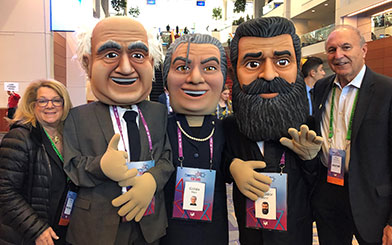 Left to right: Brenda and Roy Tanzman “with” David Ben-Gurion, Golda Meir and Theodore Herzl
The conference continues to be inspiring for many Jews year after year, whether for first-time attendees or veteran supporters such as Brenda and Roy Tanzman, who have been involved with AIPAC for over 35 years.
“It was great to see that our government is bipartisan in their support for Israel and against the BDS movement,” said Brenda. “With all Israel’s startups, technology, advancement in medicine, and much more to help the world, Roy and I are very proud to be part of AIPAC for the last 35 years, from 300 people to 18,000 strong attending the conference, including 4,000 students.” 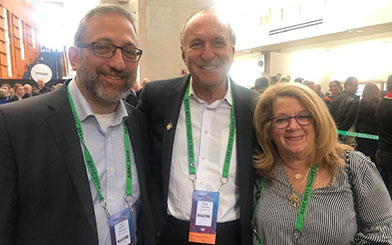 Left to right: Rabbi Eliot Malomet, Highland Conservative Temple, Roy and Brenda Tanzman
AIPAC attributes its success to being “America's bipartisan pro-Israel lobby; it urges all members of Congress to support Israel.”
“I was very impressed, regardless of party,” said Michele Fields, “with the overwhelming bipartisan support for the safety and security of Israel and the American-Israeli partnership. Makes me proud!”
Connecting Jews in the heart of NJ with the land and people of Israel strengthens the Jewish family worldwide. Federation fosters ways to learn about, bond with, and care for Israel that are fascinating, meaningful, and fun – and we're proud to support people of all ages and interests in building bridges with Israel. Attending the AIPAC Policy Conference is one of the many ways this community stands proudly with our brothers and sisters in Israel. For more ways:
• Join in on the heart of NJ’s community-wide Israel Independence Day Celebration May 8 – details at jewishheartnj.org/celebrateisrael
• Teens apply now for Israel travel grants up to $1,000 for summer programs – deadline May 1 – at jewishheartnj.org/teenisrael
• See jewishheartnj.org/israel.