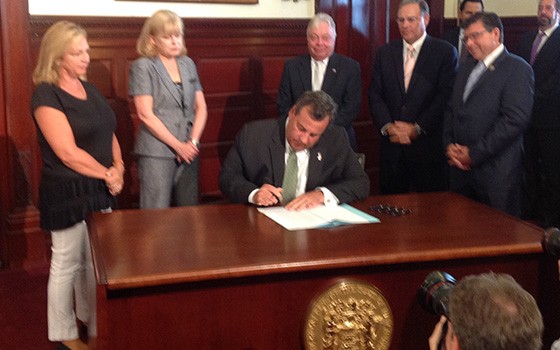 In a public ceremony yesterday, Governor Christie signed S1923 into law, prohibiting investment of state pension and annuity funds by the State in companies that boycott goods, products or businesses of Israel. The Governor’s remarks were extremely strong in support of the New Jersey-Israel relationship.

“Standing with Israel, for peace and democracy, requires more than just pledging military defense and support,” Governor Christie said. “It is in all of our best interests to invest in and partner with Israel, while opposing any attempt to wipe out Israel, economically or otherwise. I’m proud to take this action today and help set an example for other states and nations throughout the world to join New Jersey by enacting similar laws against the radical ‘BDS’ movement, as well as our earlier divestment from foreign companies with equity ties to Iran and Sudan.”

Gordon Haas, President of the NJ State Association of Jewish Federations, remarked on the signing of S1923:

"We are grateful for the support for the long standing NJ-Israel relationship provided by Governor Christie and the legislature's sponsors for the anti-BDS legislation the Governor signed today. A statewide collaborative advocacy effort led by the State Association brought together a number of supportive community organizations to deliver a strong message about the unshakeable partnership that continues to exist between our state and the nation of Israel. When our friends are challenged with discriminatory and hurtful action such as the effort to boycott Israel and Israeli businesses, New Jersey will respond affirmatively to come to their assistance and to defend a mutually beneficial relationship."

Yesterday, Governor Christie joined 15 other governors and the mayor of Washington D.C. in signing the American Jewish Committee’s “Governors Against BDS” pledge, reaffirming “support for Israel as a vital U.S. ally, important economic partner and champion of freedom.”

“The best interests of New Jersey and its citizens are served by furthering a strong economy, developing trade opportunities, strengthening our global business interconnectivity and protecting partnerships that continue to benefit our state,” said Mark S. Levenson, Chairman of the NJ-Israel Commission. “In this context, it is important to gratefully acknowledge Governor Christie’s enactment of S1923 and his strong endorsement of the NJ-Israel relationship. Prohibiting discriminatory practices, such as boycotts of Israel and Israeli businesses, is key to continuing the story of success that has seen the NJ-Israel Commission help grow to $1.8 billion annually the trade partnership between the state and Israel and Israeli companies.”