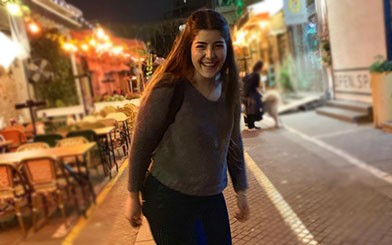 On February 18, Dana and I, the two shinshiniot, flew home to Israel for a winter break. The entire process in the weeks leading up to the flight was very exciting but also full of apprehension. On the one hand, I waited for this moment so long; to see all my friends and family again, to enter my own house, my own room, to Reut (the neighborhood of the town of Modiin I live in), to normal weather and to return, even for a short time, to my old daily routine.

On the other hand, I realized that half a year had passed and that things have changed (time did not stand still, and everyone continued on their way). My family continued in their routine, while my friends are in their gap year (shinshin) or army, and nothing remained as it was before I left. Subconsciously I knew things would change and have changed, but until I experienced that in person when I was back in Israel, I did not fully grasp it.

We left New Jersey for Israel on Monday morning. I was so excited about it, I did not sleep at all the night before. I drove to the airport with Nitz (my beloved car). Dana and I said goodbye to Dan, our supervisor at Federation, and the journey home began. Of course, it takes a long time to fly halfway across the world to Israel, but still, after a 12-hour flight, we landed in the Holy Land. All of the sudden, after six months, Hebrew everywhere! Exit signs, restaurant menus, phone messages and people speaking around us! I did not understand how much I missed the language!

After collecting our luggage, we went out to the main airport lobby, where our families were waiting for us. Itay, my little brother, immediately jumped on me, followed by Gali, my twin sister, and then my two parents… I have not seen the whole tribe for six months. It was very moving. I waited for this moment so long, and then boom - suddenly it happened. We drove home, and my level of excitement rose further! The part in which I really felt relieved was after I entered my house, seeing my dog Chelsea and sitting on a couch that was in my home and not in another house I was staying in. Despite all the warmth I have received from the host families and in the community, there is only one true home, and there is no feeling that can replace the feeling of being there. 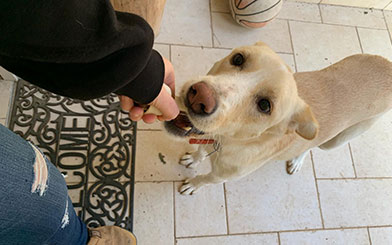 Shortly after arriving home, I went out to meet my grandparents who live nearby, and to visit my extended family, cousins, and friends who were in the neighborhood. After being so far from everyone for six months, the only thing I wanted was to be close to the people I love so much, and to take advantage of every moment with them. At the beginning, I was in a little state of shock, because there is a big difference between seeing my family and friends in person and being far away from them and talking on the phone or video. Each reunion was more exciting than the other and included a lot of crying and hugging. 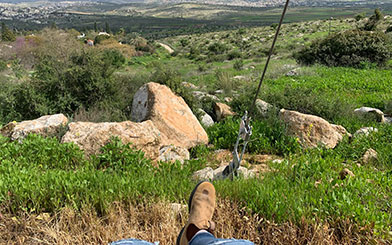 While home in Israel, I went back to doing things I used to do once upon a time (before the gap year): Seeing my Grandparents and cousins once a week to have lunch with them; meeting friends in the afternoon to go out for a walk or to sit in nature. I was reminded of how beautiful Israel is, and how amazing its scenery and views are. I cherished the ability to travel by walking everywhere, without the need of driving, to just sit and relax at a natural observation point or a coffee shop with friends and to feel relaxed. But I had to remember that I am home, but only for a little while. I had to use my time wisely, and that I would soon return to normal life and day-to-day routine in New Jersey!

On weekends, I met all my friends who were back home from their shinshin and army service, hearing interesting stories from their service and shared experiences. In addition, I met with other shinshinim who serve in different places around the world, and we compared differences and similarities between the places where we stay.

One of the things I did during the trip was visit Gali, my twin sister, in her shinshin service in Or Akiva (north of Israel, near Caesarea). I was intrigued by her unique experience, living in a ‘commune’ with 7 other shinshins, and volunteering in hostels housing people with intellectual and mental disabilities. I met the people with whom Gali works on a daily basis and I was impressed by the work she and her colleagues do. She told me about this over the phone of course, but sometimes things become clear once you see them with your own eyes. I was so happy to see what she does and to connect the stories I heard from her to real people’s faces. After visiting Gali, I visited other friends involved in shinshin service in boarding schools in other places over Israel, and other venues throughout the country.

A lot of my time in Israel was devoted to visiting my extended family. I went to Omer (a small town – community village near Be'er Sheva) to visit my grandparents, uncles, and relatives. I also travelled with Dana to Jerusalem to put notes prepared by kids from the institutions I work with here in New Jersey in the Western Wall. Jerusalem is so beautiful, and the market is so vibrant. And that is not all. I was in Tel Aviv several times (including for arranging security clearance for my upcoming military service as a flight simulator instructor in the air force), in Jaffa, and in other places around the country. 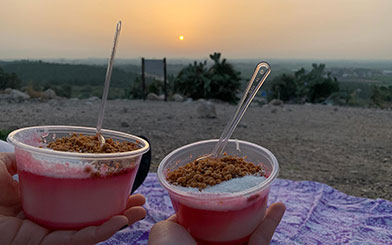 While seeing my family and friends, I tried to explain my experience in the heart of New Jersey, but not many people could understand the full extent of it. Throughout my trip back, I felt that on the one hand I came home and everything remained the same, but I returned a different person! I experienced so many things in the US and met so many new people and was exposed to a new culture. I certainly feel a changed person and I am privileged to be part of the Jewish community in the heart of New Jersey. This is an experience I would not have missed for the world.

Naturally, I was sad to say goodbye again, and to leave behind my home, family, and friend again. But I am returning with renewed strength to my second home at Jewish Federation in the Heart of New Jersey. I am looking forward to the next six months, which will surely be interesting, rewarding, and even more exciting than before!

Follow Maya's (and Dana's) continuing journey in the heart of NJ at jewishheartnj.org/shin and on Instagram @heartofnj_shinshiniot