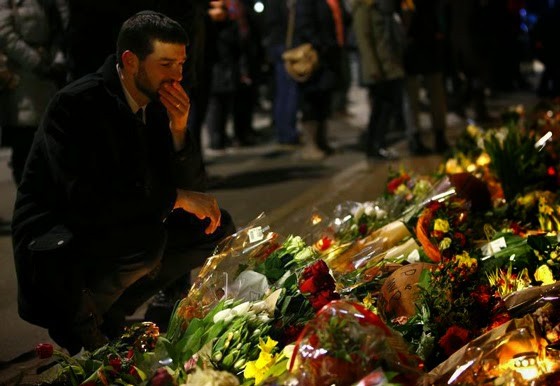 Yet again, Jews were targeted just for being Jewish. This time in Copenhagen.

We live in a time when extremists are taking center stage and trying to prove the validity of their ideas through force and intimidation.  One of the most important steps people who uphold faith and freedom can take is to stand together in the face of such terror – and to recognize that even though we might have differences, we are united by common bonds of humanity.

We stand in solidarity with our fellow Jews and freedom loving peoples around the world.

Below is an official statement from The Jewish Federations of North America:

The Jewish Federations of North America are shocked and grieved following yesterday’s attacks on the Krystalgade Synagogue and the cultural center in Copenhagen that has left at least two people dead - including Dan Uzan, a Jewish volunteer security guard - and others injured.

Michael Siegal, chair of JFNA’s Board of Trustees stated, “We are once again horrified by these violent attacks against Jews and Jewish institutions as well as those meeting peacefully to discuss the value of freedom of speech. The disturbing recent pattern of Jews being murdered in Europe, simply because they are Jews, must be condemned by people and governments across the world. We send our deepest condolences to the families of Dan Uzan and the other victims, and wish a speedy recovery to those injured, including numerous police officers.

“The Jewish community of North America stands shoulder to shoulder in firm solidarity with our Jewish brothers and sisters in Denmark – and indeed with all of the Danish people at this very difficult time.”

Paul Goldenberg, director of the Secure Community Network (SCN), will travel to Copenhagen this week to support the community in addressing security issues. SCN, the national homeland security initiative of The Jewish Federations of North America and the Conference of Presidents of Major American Jewish Organizations, has regularly consulted with Jewish organizations in the United States and around the world on security-related matters and in the wake of terrorist attacks such as the ones perpetrated in Denmark in recent hours.

Click here to read the letter that was sent to communal leadership in Denmark.