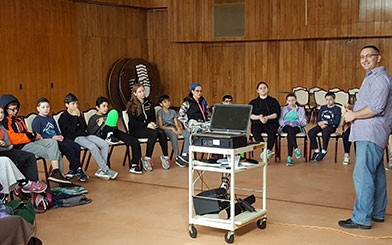 The program was planned around Neve Shalom’s sixth grade curriculum focused on modern day Israel. “I would like the students to come away with a feeling of pride in being Jewish,” said Miriam Dobin, Hebrew School Program Director at Neve Shalom. “And not only that, but pride in having our own country – the only Jewish country – and to visit or perhaps one day live in.”

Dan explained to the students his reasons why he chose to leave New Jersey to volunteer in the IDF, discussing his roles and tasks as a combat soldier, as well as the challenges he faced both mentally and physically during his service. 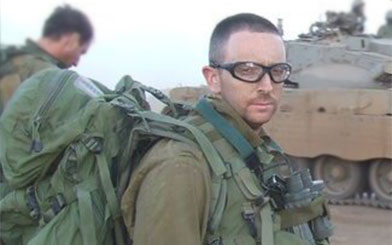 For fun, the students practiced lining up in formation, doing pushups, and completed some basic army maneuvers required by the IDF, comparable to Dan’s basic training. 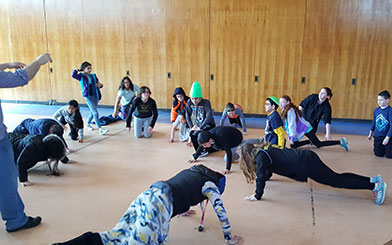 “Through discussion, video, and semi-rigorous physical training, the students were shown a glimpse of what life might be like in the IDF,” added Dobin. “They learned a lot and had a great time.”

Dan concluded his presentation with these parting words, applicable to not only the students, but Jews everywhere:

“Being Jewish is not just celebrating Jewish holidays and going to synagogue. Being Jewish also means belonging to the Jewish people whose ancestral home is the Land of Israel, today the State of Israel. As Jews, we are responsible for one another and for me, defending the Jewish State was doing my part.”

Celebrate Israel with Federation this spring at the “One Community, One People” Community Event on May 8 at Congregation Sons of Israel, Manalapan. Honor the sacrifices of Israeli soldiers and civilians made in defense of Israel and transition into a celebration recognizing 71 years of Israeli independence. REGISTER

And on June 2, march in this year's Celebrate Israel Parade in NYC. This year’s theme is “Only in Israel." Buses will leave from Middlesex and Monmouth County locations. REGISTER