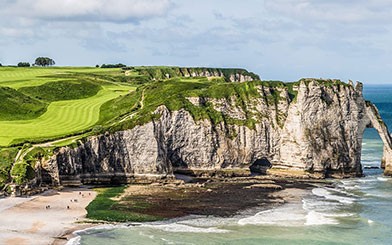 75TH ANNIVERSARY OF D-DAY COMMEMORATION TOUR
Yesterday's commemoration of the allied landings in Normandy on June 6, 1944 is especially poignant for American Jews. The liberation of Western Europe was instrumental in bringing about the defeat of Nazi Germany and shutting down its catastrophic genocide targeting our European aunts, uncles, and cousins.
Who among us does not have a grandfather, father, uncle, brother, or cousin who served our country during WWII?  Or, grandmothers, mothers, aunts, sisters, and cousins who served in the women’s auxiliary services, the war industries, and tended to the home front? How can we ever repay them for their bravery and sacrifice?
Rediscover this unique period of American & Jewish history by joining Jewish Federation’s Mission to Normandy and Paris, September 8-17, 2019.  Immerse yourself in the rich past, present, and future of Jews and Jewish life in France while enjoying the extraordinary culture and cuisine of this iconic destination.
Standing on the bluffs of D-Day beaches, exploring the stories behind the monuments and memorials of the region, is only the beginning:
$3900 per person (double occupancy) land only, air extra
Send in your $500.00 per person deposit today!  Make your check payable to JEWISH FEDERATION IN THE HEART OF NEW JERSEY and send to:
230 Old Bridge Turnpike, South River, NJ 08882