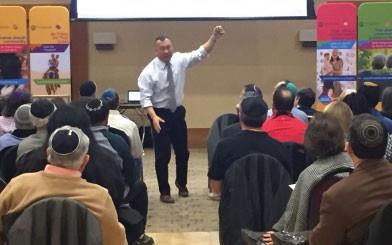 CONVENTIONAL RUN-HIDE-FIGHT RECOMMENDATION IS NOT THE ONLY ANSWER, SAYS JIN KIM, 23-YEAR FBI VETERAN
The Jewish Federation in the Heart of New Jersey conducted training sessions in Monmouth and Middlesex counties yesterday for Jewish and interfaith community leaders to learn next-level approaches to active shooter/attacker scenarios. Subject matter expert, Jin Kim, who retired in 2018 after 23 years with the FBI, presented ways to build beyond the Run–Hide–Fight approach to further empower individuals and institutions – ways that have saved lives in recent violent attacks.
Noting each institution has a unique set of vulnerabilities and resources, Kim stressed, “Every individual has it in them to be their own ‘first responder.’ A little knowledge and awareness can make all the difference in survival.”
Among his top points for individuals:
The critical point is to think through what your strategic adaptations could be BEFORE an emergency happens. What are your paths or options in your office, or in another facility?  How can you visualize and “train” for such an emergency in your head or in advance?
Among his top points for institutions:
“The Federation began responding to increases in anti-Semitism and acts of violence several years ago, with the establishment of our Security Task Force, which to date has performed or facilitated community-wide vulnerability assessments, conducted dozens of trainings, and helped some 50 institutions secure more than $3 million in government and Federation security grants,” said Amy Keller, the Federation’s lead for security initiatives. “In the wake of the Pittsburgh synagogue shooting, we are redoubling efforts to do more – including launching a dedicated campaign to fund efforts countering anti-Semitism and strengthening community security – because it does take money; we need everyone in the community to give." Donations can be made to the Federation's special campaign to fight anti-Semitism and enhance community security at jewishheartnj.org/stophate
The Federation conducted two sessions with Mr. Kim on Nov. 29: a morning session at Highland Park Conservative Temple – Congregation Anshe Emeth and an evening session at iPlay America, Freehold. More than 115 people attended in total.
Among those attending Kim’s sessions, Magda Reyes, Director of Education at Monmouth Reform Temple, Tinton Falls, said, “Jin Kim was very insightful and presented new material we haven’t considered. We are actively thinking about security and preparing our facility, but he went beyond what we had ever thought of.”
Rabbi Eli Garfinkle of Temple Beth El, Somerset, said, “I didn’t know Run-Hide-Fight is not necessarily the only answer.”
“Excellent,” said Roni Salkin, Executive Director of Jewish Family Services of Middlesex County. “I can’t wait to go back and work on our procedures.”
Eric Sigoura of Hillel Yeshiva & DSN said Jin Kim offered a “fresh perspective on security as a whole. It made me think of things I never thought about in terms of protecting myself and those around me.”
“We are feeling the threat of anti-Semitism,” said Susan Lemerman of Congregation Neve Shalom, Metuchen. “This program gave us guidance and the support the Federation provides is invaluable.”
Rabbi Rav Cantor David Amar, Congregation Ahavat Olam in howell, said “As a person who grew up with weapons and guns and being under fire in another country, it’s interesting that Jin Kim raises the notion that the methods used today aren’t working; and the idea of training our kids, communities and synagogues to think differently about defending themselves makes sense.”
NJ State Assemblywoman, Nancy Pinkin, reflected that institutions are looking to create balance between security and accessibility, noting, “the more people are trained, the better prepared they will be if they need to react. Additionally, the State Legislature is working to increase the resources available for our religious institutions and take steps to address rising anti-Semitic bias incidents.”
To learn more about the Jewish Federation’s initiatives to stem anti-Semitism and step-up security, go to jewishheartnj.org/crisis.
The Jewish Federation in the Heart of New Jersey strengthens the entire Jewish community – making it more caring, connected, and committed to addressing the issues it faces today and for the future, as well as responding when crisis occurs. The Federation grants more than $4 million annually to partners and programs meeting critical needs from hunger and mental health to education and safety throughout Monmouth and Greater Middlesex counties, as well as Jewish communities around the world.
Jin Kim is widely recognized as a subject matter expert and material practitioner in active shooter and targeted violence attacks. Mr. Kim retired from the Federal Bureau of Investigation (FBI) in 2018 and is a twenty-three-year veteran of the FBI’S New York Division. He served as the Active Shooter Coordinator on the Crisis Management Unit and was the leading authority directing active shooter & workplace violence preparedness, resiliency, and training, for the FBI and its corporate and private sector partnerships. Mr. Kim is the Founder & Principal of the PerSec Academy, LLC, specializing in Active Shooter and Workplace Risk Management and is the creator and founder of the T.A.S.K. Process – Threat Adaptation Strategies & Know-How.