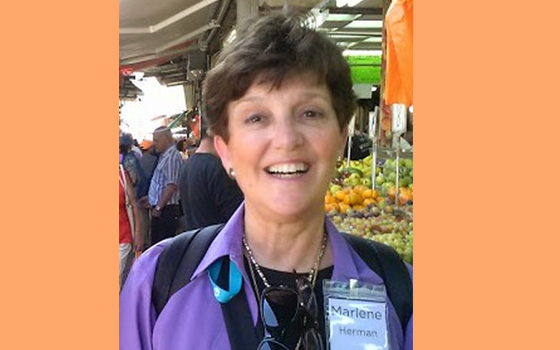 Dr. Marlene Herman was elected to serve as President of the NJ State Association of Jewish Federations at its Annual Meeting at the JCC of Central NJ in Scotch Plains. Herman, a resident of Edison, NJ, succeeds Gordon Haas and will serve a term of two years.

The Annual Meeting, which took place on July 16, 2018, also confirmed a slate of officers to serve as members of the Executive/Operations Committee.

As the government affairs and advocacy arm for the state’s eight Jewish Federations, the State Association interacts with the Governor’s Office, members of the State Legislature and with Congress on behalf of the priority interests of the federations and their beneficiary agencies.

"I am pleased to accept leadership of continuing the advocacy efforts of the State Association and helping to secure Jewish community interests for all Jews in our State," stated Herman. " I look forward to moving the profile of the State’s Jewish community forward by directing our efforts to address rising anti-Semitism in the state, the safety vulnerabilities of our community facilities and institutions and, among other initiatives, as a former Co-Chairperson of the NJ-Israel Commission, growing beyond its current strength, the relationship between our state and Israel, " Herman added.

“As a longtime leader of our Jewish community in the Heart of New Jersey, Marlene has proven to be inspirational with her good counsel, guidance and commitment to community values and viability.” stated Keith Krivitzky, CEO of the Jewish Federation in the Heart of NJ. “Given Marlene’s experience and capabilities, as well as her record of accomplishment, her tenure as State Association President is certain to benefit of us all and help build a community consensus on issues of importance,” Krivitzky noted.

The Annual Meeting keynote address was presented by Tammy Murphy, the First Lady of New Jersey. “We were pleased to hear from the First Lady that the Jewish community has a significant role to play in the future of the state,”  stated Jacob Toporek, Executive Director of the NJ State Association of Jewish Federations. “She noted that Governor Murphy supports our priorities such as enforcing anti-BDS laws, welcoming the growth of business and cultural relations with Israel, embracing diversity and zero tolerance for bigotry and acts of hate,” Toporek added.

The 2018 trip, which took place March 7-16, was the third such legislators visit to Israel sponsored by the Jewish Federations and coordinated by the State Association.